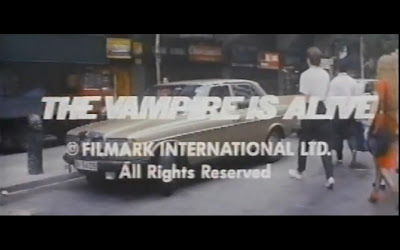 With the cut'n'paste films of Godfrey Ho, they were made by IFD films, and there was a sort-of rival company that did the same thing-Filmark. I don't know much about Filmark, other than it was owned by Tomas Tang, and that Robo Vampire was a Filmark production. What is Robo Vampire, you ask? It's a film about gangsters who use vampires to effectively smuggle drugs, and it's up to Robocop to take care of them! As for Counter Destroyer, aka The Vampire is Alive, it's a horror film that could fill asylums with its craziness!

Counter Destroyer opens with a cool theme (probably not original to this movie) and the title card, which does most definitely not read Counter Destroyer! So, a badly-dubbed woman, Joyce, and her equally vocally-mismatched friend Cindy are talking while on a car ride. Joyce is a scriptwriter, headed for an isolated villa, so she can work on the important script about the last emperor of China that she's writing in privacy.

Joyce, Cindy, and her other friend, who was driving them to the villa, come across a Taoist monk, doing something with smoke and paper. Despite the guy's warning to not go near the monk, as evil spirits might go from him to them or something, Joyce and Cindy go over and talk with the monk, who's dubbed with a hilarious squeaky-pitched Elvis voice! He's amicable enough, warning them about evil spirits, but when he points the bone he's holding towards the guy, Joyce pulls a gun on him! Eventually she puts the hardware away, and the three walk off and the monk does some ritual with a human skeleton and two skulls, one of which hovers off to spy on Joyce and her friends without the monk's knowledge. 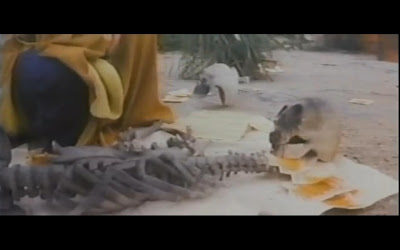 The three arrive at the villa and put their luggage away, and Joyce pulls a curtain away, revealng a large cutout of a Chinese emperor, which gives Joyce the chills for some reason. As she walks away, the cutout suddenly gets human eyes and spies on her. Then she gets a call from Dixon, an overprotective friend (boyfriend?), and after that, she disconnects the phone and tells her guy friend to take it with him when he leaves, as she doesn't want any distractions. The guy goes to his car, and starts it up, but before he can drive away, the phone rings. Then the cord leaps up and strangles him to death.

Then the movie decides that it wants an audience with whiplash, and we cut to Lawrence, a movie producer and Joyce's boss, who's talking to an Asian woman who I totally believe is in the same room as him. The woman is Jackie, a private detective, and the guy from before was a driver for this Lawrence. Jackie theorises that the driver's murder was possibly linked to the last emperor of China film, and Lawrence explains that there are several other film companies making their own last emperor of China movies to cash in on this one. He gives her a file full of info about these other companies. 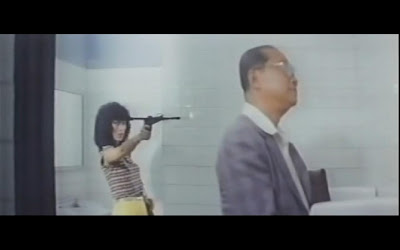 Jackie drives randomly in the night, and sees a guy with a gun yelling and chasing after a woman. Jackie shoots the guy dead and tells the woman to hop in her car. Next, Jackie and the woman are at a cafe, and Jackie sees one of the rival company producers, so she follows him to the bathroom amd shoots him in the head with a crossbow (dumbass deserved it, he looked at Jackie holding the crossbow for nearly five seconds until he reacted).

Then the movie switches back to Movie A, where there's a storm at the villa. Joyce is researching for her script (she said that she'd finish it by a week's time-how the hell is she going to manage that when she's still doing research?) when blood starts dripping from the ceiling. She goes upstairs to investigate, and the movie uses four 'OHMIGOD IT'S SOMETHING SCARY!ohwait, no, it's just an animal' jump scares in quick succession. She goes downstairs again, and we cut to Freddy Krueger (yeah...roll with it) taking the sleeping Cindy to a rock. 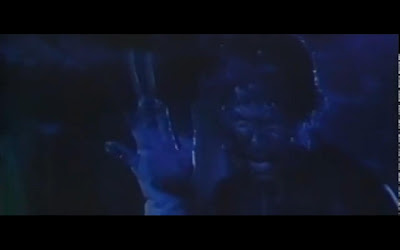 Now when I say Freddy Krueger, what I mean is, an Asian guy with bad face-paint and long finger-claws! He sharpens his claws against a rock as two comic-relief vampires (um...) watch. Cindy wakes up and screams, and...the film's visual dies for about ten seconds! When the film comes back to life, Chinese Freddy has killed Cindy and is taking bits off of her and eating them. The two vampires are about to go over and eat Cindy as well, but the Taoist monk appears behind them and stops them. Then Chinese Freddy sees the monk and leaps towards him. The two fight...I think. Freddy blows some smoke from his mouth and growls, and the monk lightly waves a cloth around (which the vampires look at in awe) and gets his foot stuck in a bucket (um...). 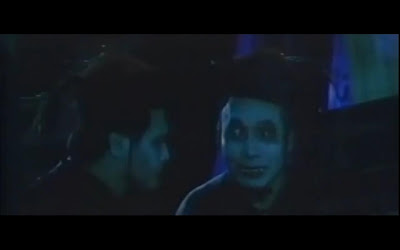 Chinese Freddy attacks the monk, and tears the monks shirt off, which is bad for Freddy, as the monk has...a weird laser beam light thing attached to his chest!...that does nothing, and Freddy tears it off. Then Freddy goes over to the two vampires, who are eating Cindy, and he fights them, just as Joyce leaves the house to look for Cindy. Joyce comes across Chinese Freddy eating Cindy and she screams...then wakes up! It was all a dream! 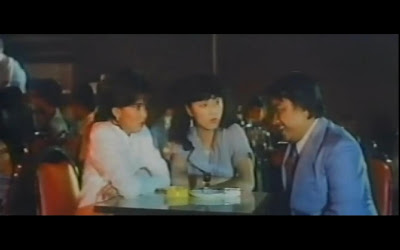 Cut to Movie B, and a guy is looking for Jackie, and he finds her 'assistant' (the woman from before). The guy kidnaps the woman and takes her to his gangster hideout. Jackie comes home and finds out what happened (here it's said that the gangster is named Ricky, and the woman is named Penny or Fanny). She goes to Ricky's base, and after a conversation, she scratches him which kills him instantly, and necrotises his arm (um...).

Then Jackie and Fanny are in a nightclub, and a film producer named Jackson calls them over to hs table. Jackson convinces the two to appear in his movie (which the two women are just using as a ploy to get to him) and they leave. They go to a diner, and are saced from a couple of gunmen by two random guys (who just happen to know kung fu). A battle royale starts up between the four and the two gangsters, and they chase the gangsters away. Then the four have drinks. The guys are Paul and Joe, and they're police officers (Ah, diners-anyone, from hitmen, to robbers, to cops always dine in the same place!). 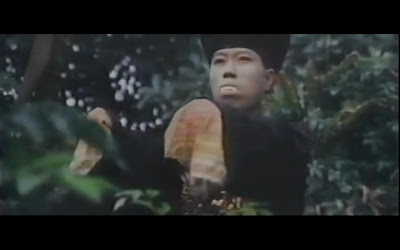 Jackie later tells the two cops the whole story (probably minus her assassinations) and that she thinks Jackson ordered the driver dead. Then Jackie goes with Lawrence and Dixon, who go see a fortune teller. They find out that while female members of their group are temporarily marked for catastrophe, the film will be a huge success. They leave and Lawrence goes off on his own into a forest, and is attacked by hopping ghost-zompires, and a hulk-zombie with exploding footprints! 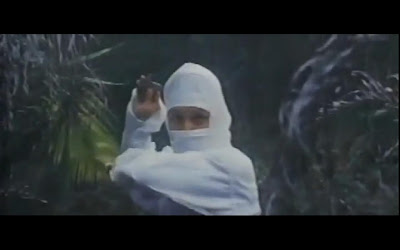 After a beating, Lawrence turns into a ninja (!) and attacks the hoppers, eventually tying them against a tree with linen-wrap. Then he uses exploding ninja stars against hulk-zombie! He destroys all three monsters, and the movie cuts to Joyce and Cindy, both at the villa's pool. Joyce is in the pool, reading Chinese history to Cindy, who writes stuff down. Then Chinese Freddy's claws emerge from the pool and destroy Joyce's inflatable thingie. She falls in the water, and when she surfaces, Freddy is gone and Cindy is confused on how Joyce fell into the pool. Joyce says that the thingie deflated, and she gets out of the pool. Joyce leaves to go to the showers, leaving Cindy alone in the room. Then the pool explodes with smoke and Chinese Freddy flies out...then vanishes, leading Cindy to believe she's just seeing things. 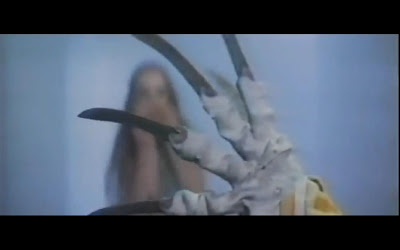 Then the lights in the showers where Joyce is start to flicker. She inspects the room, and it attacked by Freddy. Cindy goes up to the showers and is knocked down by Freddy. She woodenly screams 'help me, Joyce' about seven times, even though Freddy isn't pinning her down at all, and then she must have thought 'fuck it' and she attacks Chinese Freddy herself. She runs off and Freddy turns into Joyce. Cindy runs off and Joyce catches up to her. Joyce acts coldly, and not-herself though. 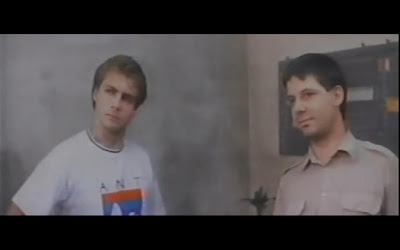 Meanwhile, Lawrence and Dixon talk hilariously stilted dialogue to each other, then they call Jackie for a progress report. The film then cuts to Jackie's part of the movie. A couple of gangsters (with hilarious dub voices) plan to kill her and kidnap Roman, the film's art director. Cue next scene and Lawrence is at the police station, angry that Roman has been kidnapped. Then the cops from before, Paul and Joe come across a group of thugs beating up Roman and rescue him. 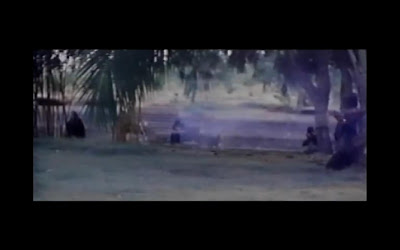 Then the film cuts to an army of evil rifle-ninjas attacking Jackie and Fanny's house. Then the scene abruptly cuts to Jackie talking with one of Jackson's film crew, and she gives him a bunch of flowers to deliver to Jackson. The guy drives off, and the flowers explode, killng him. Then HOORAY, we're finaly back to Movie A! Joyce is sleeping, until she's woken up by Chinese Freddy. She gets her gun and shoots him several times, but that does nothing. Then Chinese Freddy explains that he is looking for a woman to be his bride, so he can be realeased from the spirit world. Then he lunges on her and vanishes into smoke. Cindy runs into the room and sees Joyce turning into Freddy. She/he kills Cindy, then Joyce comes back and Chinese Freddy suddenly reveals that he's working for Jackson! Um...

Then the film cuts to Jackie, who trails a gangster, then kills him. She drives away and gets in a car chase with a cop car for no reason, all while cool not-from-this-movie music plays! Then the film cuts to Lawrence, talking with the police again, and he says that he's sick of the police not doing their job properly and arresting any of Jackson's men, so he hires another private detective to help Jackie. 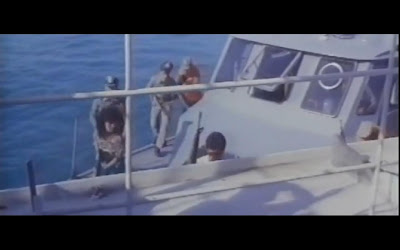 Jackie and the new PI talk, and he casually mentions how both Roman and Fanny have been kidnapped (what!? Roman was rescued! And when was Fanny kidnapped? And if she was, why the hell is Jackie being so chipper? huh!?). He says that the two are being held on Jackson's private boat, and that Joe is undercover there as a waiter. After a scene at the bar with Paul and another guy, the film's editing and continuity start to dissolve! 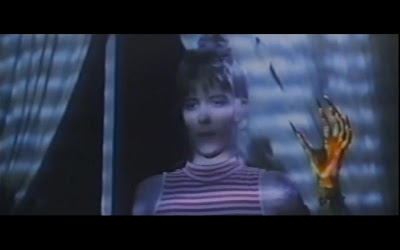 After an assault on Jackson's boat by Jackie and the cops, Movie B abruptly ends, and Dixon, at the villa, goes into the room where Joyce and Cindy were attacked. He comforts Joyce, then she starts turning into Chinese Freddy again. She holds her burned'n'clawed arm up, and a shocked Dixon proceeds to turn into Robocop!... 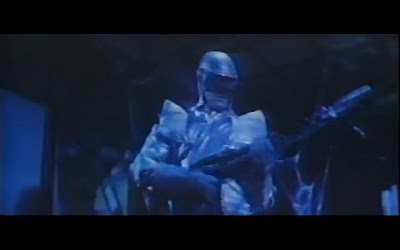 Counter Destroyer is one crazy-fun movie! It's filled to the brim with wacky stuff going on, even if the haunted villa storyline goes for a shorter time than it deserves and takes backseat to the gangster storyline. And the ending is just wacked out in the most insane way...and this is after the Robocop reveal that it goes truly crazy! This movie has to be seen to be believed!

Wait, what did this movie have to do with counters? Or counters being destroyed?....
Posted by Chris Hewson at 11:26 PM