[May Monster Madness]-Elvira: Mistress of the Dark (1988) 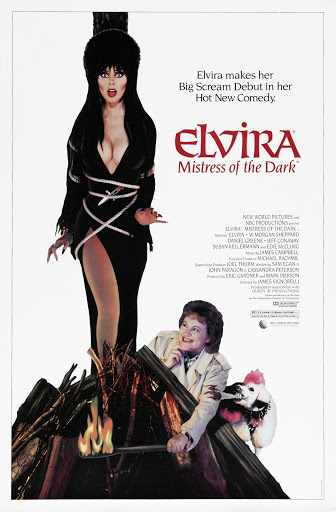 If there's one thing that's sorely missed nowadays, it's horror hosts. One of the most notable of these was Elvira (from the show, Elvira's Movie Macabre, which ran in the 80's). Elvira (played by Cassandra Peterson) was a perky, kick-ass valley girl goth type with large 'assets' who presented all sorts of b-movies, and in 1988, Peterson made Elvira: Mistress of the Dark!

The film opens with the final moment of It Conquered the World, then cuts to Elvira finishing up this episode of her show. After a few fun jokes ("Next week, it's The Head With Two Things...I mean The Thing with Two Heads"), her show finishes and her set is immediately hijacked by the next show. While Elvira goes to leave the studio, she's introduced to her new boss, a rowdy cowboy type who sexually harasses her. She immediately quits, and when she's about to leave, she gets a letter from the executor of her great aunt Morgana Talbot's will, of which Elvira is a beneficiary of, even though she's never even heard of this 'great aunt'.

Since she needs $50,000 to fund her dream Vegas performance, she's very eager to go to the will reading (which she daydreams about in a hilarious gameshow scene). She gets into her awesome goth car (completely black, filled with barb-wire and various other ooky things) and drives all the way to Fallwell, a very, very morally strict small town. 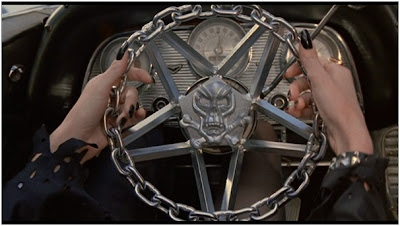 When she arrives, her car breaks down, so she sends it to the local mechanic, then she seeks out a motel. She finds one, but it's run by a crotchety old lady and her son-or husband, I have no idea-(Pat Crawford Brown and William Duell), who's disgusted by Elvira's appearance, just like all the other townsfolk she meets, namely Chastity Pariah (Edie McClurg), head of the town council. 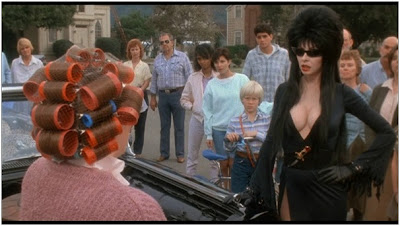 When night comes, Elvira goes to the town's bowling alley, where it gets 'pretty wild' at night. After getting a drink, she's approached by two thugs, who she heckles them and they get angry, but before they can attack her (and probably end up losing!) nice guy, Bob (Daniel Greene) knocks the two thugs out. Elvira and Bob go outside and Bob talks about the theater that he runs, which is only allowed to show G-rated movies ("There's nothing wrong G-rated movies, as long as there's lots of sex and violence", says Elvira). Elvira tries to seduce him, but he leaves before she can.

Elvira goes to the will reading, where Morgana's brother, Vincent Talbot (W. Morgan Sheppard), the movie's villain, is present. Two servants of Morgana's are given cash payouts, and instead of getting a huge fortune as she'd hoped, Elvira only gets posession of Morgana's house, her dog Algonquin, and a family recipe book. And as for Vincent he gets "the rest of my estate and holdings, of which there is none", leading to a hilarious reaction from him. 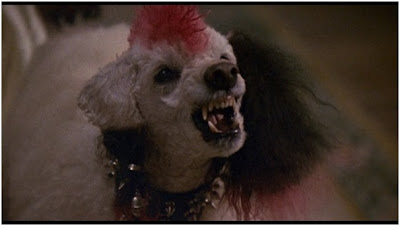 The destitute Elvira is walking home when approached by Vincent, who asks her for the cookbook, and offers to pay for it. She agrees, and tells him to come by her recently acquired house later. When Elvira arrives at the house, she sees that it's old and run-down. Inside she sees Algonquin-or Gonk, as she calls him-and she gives him a punk makeover! Vincent comes over afterwards and asks for the book, but Gonk hides it. Angered at Elvira not being able to find the book (and her attempts to sell the house to him), Vincent leaves in a huff. 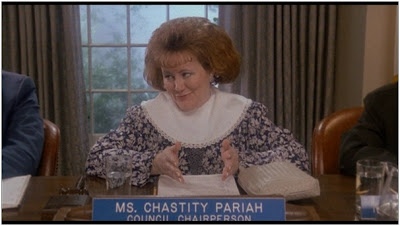 Later that night, some local boys perv on Elvira via the Animal House technique (assuming that involved a ladder-my memory of Animal House is a bit sketchy) and get shooed away by her. The next day, the boys come back again to help her fix up the house-something that heap more teens join in on ("Great, grab a tool and start banging!"), including Robin. Soon, the town council talk about Elvira (and Edie McClurg is hilarious!). 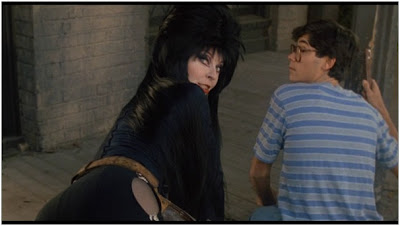 After that, the town's real estate man (Kurt Fuller) comes over and tries to get it on with Elvira, and she hurls him out of the house. He angrily swears that she'll never sell the house. So Elvira goes in search of a job, so she can get some money, and while she's looking (and geting nowhere, due to no-one wanting to hire her), the two goons from the bowling alley are tasked by Vincent to search the house for the recipe book, until Gonk manages to scare them away. Meanwhile, Elvira comes across Bob working on the sign of his movie theatre. They start talking, and he says that he would hire her, but he's barely making enough money as it is. Then Elvira comes up with a plan-have a midnight movie showing of Attack of the Killer Tomatoes! (Which she just happened to have in her car boot). 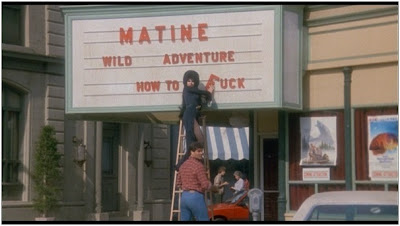 Elvira manages to convince the town's teens-who are all to be expelled if they're seen with Elvira again-to attend the showing. It's a huge succes, but 'perky' Pattie overhears where the showing is and tars and feathers Elvira during her Flashdance scene. Elvira and Bob go back to her house, and after she washes up, she decides to cook them both dinner, so she reads from the recipe book, and ends up making a curry monster, and she realizes that it's a spellbook. 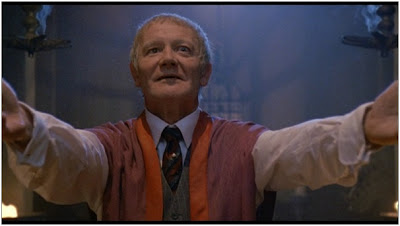 She also goes up into the house's attic and finds a letter addressed to her from Morgana, which tells her about her origin and that Vincent killed Elvira's mother. The next day, Elvira gets revenge on the denizens of Fallwell at a cooking-show with a 'special' casserole. During a flustered town council, Vincent convinces them that Elvira is using witchcraft. Elvira is then arrested by the townsfolk, who plan to burn her at the stake...

Elvira: Mistress of the Dark is awesome! It's a hugely (in more ways than one) cool comedy and Cassandra Peterson is great as sassy, sexy, and ooky Elvira. The film's comedy is funny all throughout, and the rest of the acting is great as well, from the scene stealing Edie McClurg, to the straight-faced villain, Vincent, and the suspiciously busty Pattie. Also, the ending is awesome!-right up there with the ending to Casino Royale (the 1967 version, that is)! 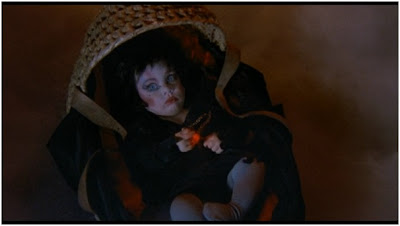 What's also awesome is that not only is there another Elvira movie, her TV series, Elvira's Movie Macabre is back on the airwaves with new episodes!

So until next time, unpleasant dreams...
Posted by Chris Hewson at 10:06 AM