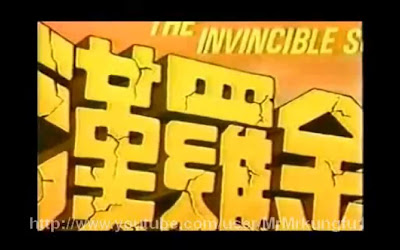 The Invincible Super Guy!Well that's a cool and succinct  title, isn't it! Too bad this chopsocky film doesn't quite live up to the title, for reasons I'll explain soon.

The movie starts off with opening credits that are cut off by the screen's edges-apparently I'm actually watching The Invincible S! Also, the credits misspell supervisor. In the opening credits are several cool illustrations, scored to a fun theme.

The movie opens wth two thugs tackling a woman out in the countryside and trying to rape her. I say try, because she screams, the guy kneels over her for a second, then gets up and walks away with his friend, acting like he's just done something. The two thugs then come across a noble being carried around the area on a wooden thingie. The two thugs, armed with crazy weapons (a chain whip, and two giant buzz-saw ninja stars that scream "I am made of cardboard") rob the man, then go on their merry way, eventually coming across a sign that says "Your name or your life". 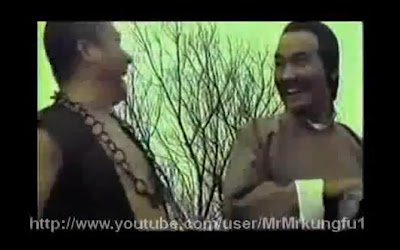 A guy and a girl-siblings-approach the two thugs and demand that they give them their names. The thugs introduce themselves-Yenkashu and Invisible Feet. The two people have heard of them, and fight. During the fight, Yenkashu steals the woman's earrings, so the two people decide to make a deal with the thugs, and the take the two to a hidden village/temple/something-or-other. 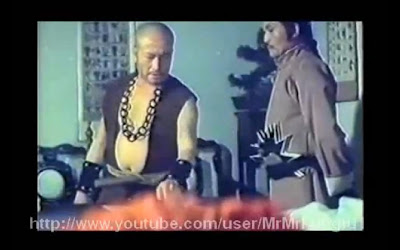 The two people give the two thieves a mission-break into the palace of a Lord Lee and steal his treasures. The thives refuse at first, but accept when called cowards (ah yes, the Marty McFly technique). Meanwhile, a woman is training, with her fists, feet, and kickass weapons! She's at Lord Lee's palace, and she goes inside, finding Lee furious, as his gold has been stolen-with a note left at the scene, saying that Lee's gold is 'going back to the people', signed, 'The Super Guy' (hey, whaddya know, the movie's title isn't a misnomer-yay). 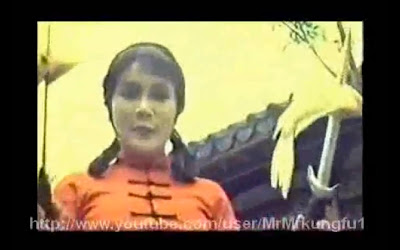 One of Lee's worker-and the woman's father-starts packing, and when Daughter asks why, he says that when he was younger, he was a robber, and he had a run in with the Super Guy, who was a worker for a security organisation. The confrontation left Worker with two coins embedded into his chest. Daughter (MOVIE! Will you name your bloody characters!) goes to pack, and she gets her Mortal Kombat Scorpion spear-rope-blade thingies out, and says a strange and funny line-"Does Super Guy think he's so great? He must have six arms!". 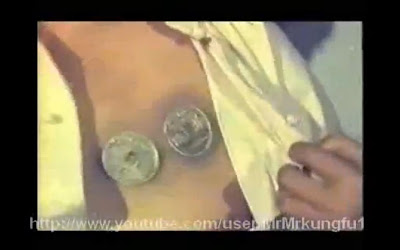 The two people who hired the thieves are attacked by them, because they found the gold already stolen, and they think that the two tried to frame them. Both parties realize that someone else took the gold, and they agree to meet up later and find the thief.

A mysterious man is roaming the city, and bumps into Daughter, who finds out where he's going and asks him if he can deliver a letter to Coach Lin (the name of the guy who was coined-how 'convenient' that when I first heard his name, there was less than an hour left of movie!). The guy (who must be blind, as he keeps calling Daughter, 'he'!) finds Lin and gives him the letter. Lin goes off and is followed by Killer Fan (the gal who hired the two thieves with her brother). She attacks him and questions if he's the thief, and Lin tells her that Super Guy is the robber. Meanwhile, Brother (MOVIE! NAMES!) finds Lin's daughter and kidnaps her, taking her back to a cave hideout, where Killer Fan is. They talk, then are attacked by Daughter. Their fight is cut short when the mysterious guy Cool Aid Man's straight through a wall! 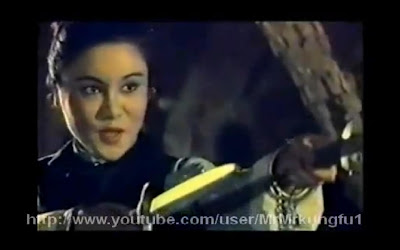 Mysterious Guy saves Daughter and the two slowmotion hightail it outta there, with Guy throwing a bomb to cave in their escape route.  Killer Fan and her brother leave to find Lin. Soon, allegiances are revealed, and sinister new people enter the fray...

The Invincible Super Guy is a fun, albeit flawed chopsocky film. It's like a movie adaptation of a fighting game-it's full of characters, all of whom have special weapons (from explosives, to Scorpion-spears, to boot daggers, ghost armies, and invisibility). This also means that practically all of those said characters are going to die, and they do, save for a couple. 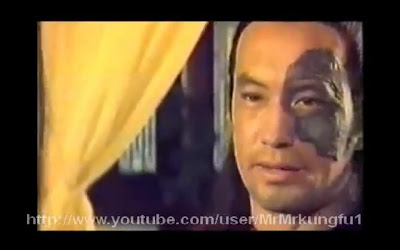 The film has a few negatives. One is it's sheer refusal to name characters for long stretches of time, and the film has a downer ending-not an 'orphanage on fire' ending, but still a downer. The biggest problem is that Super Guy, the title character, is only in the film for about six minutes, tops!

The positives make up for that though. There's goofy dubbing, cool weapons and traps, crazy dialogue here and there, and fun characters, with crazy names!

The Invincile Super Guy is flawed, but definitely worth a watch for fans of goofy martial arts films.
Posted by Chris Hewson at 10:45 PM