When it comes to Italian horror films, many of them skimp out on certain film trademarks such as 'plot' or 'logic'. And that works in the favour of many of them, especially Dario Argento and Lamberto Bava's Demons!

Demons in an Italian sorta-zombie film from the 80's that is one part awesome, and one part AWESOME! It's about a bunch of people locked up in a mysterious theatre that is being overrun by strange 'demons'...

The movie opens with college student Sheryl (Natasha Hovey) at a train station, where she encounters a mysterious silent man with a metal half mask (Michael Soavi). The man is handing out free tickets to the opening of a new theatre, Metropol. Later that night, several people are at the Metropol, from Cheryl and her friend Cathy (Paola Cozzo), two guys, George (Urbano Barabeni) and his friend Ken (Karl Zinny), a blind guy and his wife, to Tony the Pimp (Bobby Rhodes)! In the theatre's lobby is a motorcycle, a model with a katana on it, and a demon mask. One of Tony the Pimp's hookers, Rosemary (Geretta Geretta) plays around with the mask and scratches her face on it. 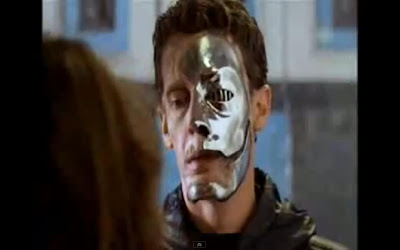 The film playing is a sleazy horror film about demons (so authentically done that it even has bad actors!...well, bad dub actors at least). The characters in the film within a film are teens in search of a crypt, the crypt of Nostradamus, and they find inscriptions such as "They will makes cemeteries their cathedrals, and the cities will be your tombs". The teens find and break open Nostradamus' crypt, and find several writings. One of the teens outs a demon mask he finds on and cuts himself. Then Rosemary's wound starts bleeding again, and she goes to the bathroom to wash up. 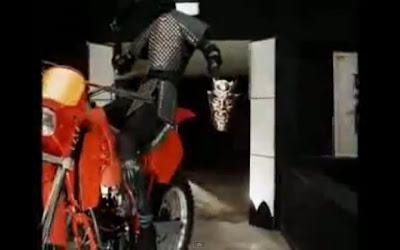 While the bodies hit the floor in the movie, Rosemary's wound starts beating, then explodes with pus. Tony's other hooker goes in to check on Rosemary and finds her-as a demon! Demon-Rosemary (or Rick James-Rosemary, depending on how much of a resemblance you see) attacks the hooker, who runs off. She runs until she's behind the theatre's screen, and she crashes straight though it as she starts to transform into a demon (thanks to the scratches from Rosemary). 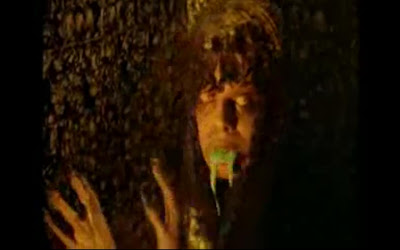 Everyone goes over to her and see her turn into a demon. Everyone runs away to the doors, but they're concreted over (or the concrete was just part of the doors). Now that hell is breaking loose, Tony the Pimp takes charge! He, George, Ken, Cathy and Cheryl all go to the projection room to turn the movie off, thinking that might stop everything happening. They break in and find that no-one's in the room-it's entirely automatic. They trash the room and equipment and the movie flickers off. Meanwhile, in the outside world, a bunch of dumb teen punk cokeheads break into the Metropol, and something else wants to break out... 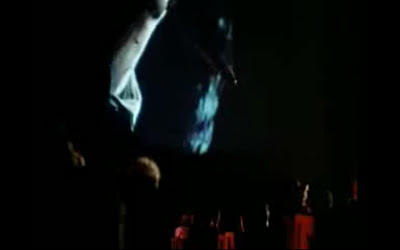 Demons is beyond cool! It manages to prove that a movie doesn't necessarily need a complex plot at all to still be entertaining: people go to theatre-people turn into demons-demons kill people-people die-survivors survive-that's all the plot there is to Demons. There are hints to a plot, which makes the movie very interesting, as it leaves the viewer wanting to know more (in the good way). I actually have my on kinda-theory about the film involving the mysterious man with the half-mask amd the guy who was scratched on the face in the movie-within-a-movie. 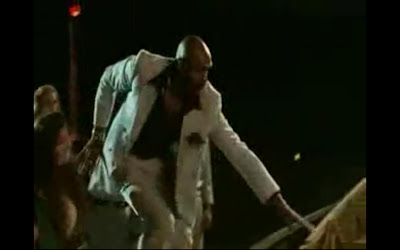 The climax is really something special! I won't spoil it, all I'll say is that it is awesome in every way! Also, there is something really strange that happens after THE scene-the survivors are in the theatre aisles, when a helicopter randomly crashes into the Metropol! And they use it to get out of the building. How many times can you say 'deus ex machina'? 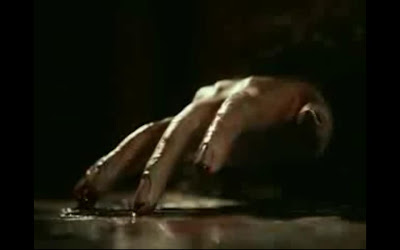 The film is full of gore, and the effects are great!-scalps torn off, necks ripped out, eyes gouged, the bloody transformations into demons, and limbs flying (by the awesome climax)! Demons also has a rockin' soundtrack, with music from Billy Idol, to Motley Crue, Rick Springfield and many more.

The film's characters range from uber-cool, like Tony the Pimp and George (he's actually pretty bland until the end, where he becomes as badass as Ash Williams!), and to entertaining enough (like the blind guy's wife, who cheats on him while he's sitting right next to her!). 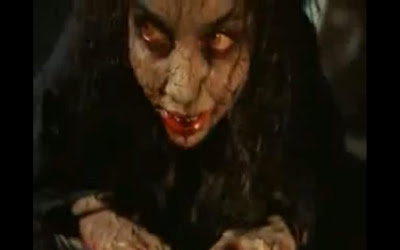 The film doesn't have much problems. One negative is the bad dubbing, but that's not too annoying. Plus, Tony the Pimp dies way too soon (a problem that's reversed in the sequel, where Tony was lucky enough to suffer from one of the minor side-effects of becoming demon spawn-he became a gym instructor named Hank). The ending of Demons has always bugged me though. It's all cool, except for one little thing-a certain character suddenly becomes a demon (and is blasted down by a kid with a shotgun in one hand, sandwich in the other!), even though he/she was never scratched by any demons. It led to a cool ending stinger, but I still don't take to it (other than the super badass kid!).

Speaking of badass', this movie is full of 'em! Tony the Pimp, George, the kid and his family, and the guy in the metal half-mask (by his looks). 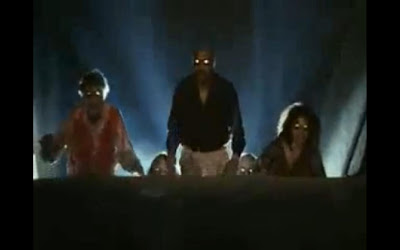 Demons is just a great example of Italian horror-light on plot and sense, high on gore! For anyone who hasn't seen or heard of his movie, go watch it immediately, it will be worth it!
Posted by Chris Hewson at 8:36 AM