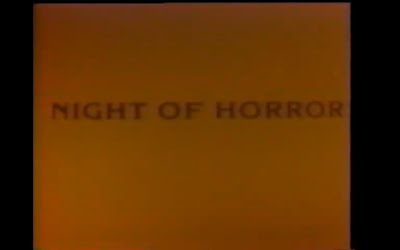 Be afraid. Be so, so afraid. The Necronomicon is nothing compared to this slice of cinematic hell!

Ok, a little backstory, Night of Horror is one of two confederate zombie movies made by Tony Malanowski, a director who must have really liked the concept of southern, slavedriving undead. The other one was a remake of this called Curse of the Cannibal Confederate. Funnily enough, the plot of both films is the one used for Dead Snow-a group of zombies who lay dormant until an object of theirs is stolen, and they won't stop hunting the people who took it until they get said object back. 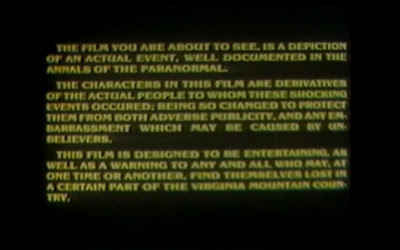 Night of Horror opens with a disclaimer claiming the events of the movie to be true! There is a short clip of the confederate zombie-ghosts talking, then the opening credits start, playing an ok piano theme that kind-of sounds like Freebird, and I hope anyone who watches this movie likes it, because it is played up to ten times! The movie opens proper with two guys in an empty bar. They talk (with the dialogue so hard to hear that it's borderline inaudible) about random stuff, from bands to family life for SEVEN MINUTES! The main guy, Steve (Steve Sandkuhler) EVENTUALLY starts explaining that a  few months ago, he went to his father's funeral, and brought along his half-brother Jeff (Jeff Canfield) and his wife Colleen (Gae Schmitt), and Colleen's sister Susan (Rebecca Bach). 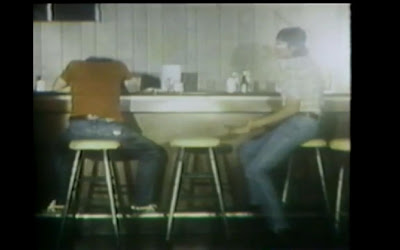 Having been at the funeral (which is never shown), the group plan to head to mountain country, Virginia, where the guys' father left them several acres of land in his will. Steve has the hots for Colleen, shown as he talks about how he wants her. 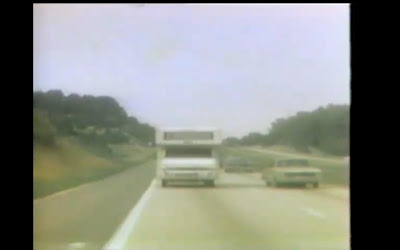 I also hope you like driving, because for the next three nonstop minutes, it's only driving, wth no dialogue or shots of the characters, all while the theme starts playing again! After the driving is over, Colleen reads Edgar Allen Poe poems to Steve for a few minutes. Then Steve narrates that everyone save for Jeff slept in the back during the drive. Riveting stuff! Then they stop the caravan and Jeff and Steven talk about what they're going to do with the land that's been left to them (also, in this scene, there's a large stain on the camera lens!). Then Colleen goes on about being scared, because this is ghost country, supposedly. 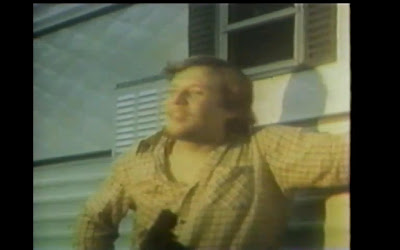 The theme plays again, partially, along with more driving, then Steve plays a harmonica for several minutes and talks. Then the caravan hits someone (who we never see), and there's no body. Colleen thinks that it was a spirit. So the group decide to hit the road, and the theme plays again! We see Colleen draw for over a minute (!), then, come nightfall, the caravan's engine stops, so Jeff goes to see what's wrong with it (and it's suddenly daytime again!). They all decide to camp where they are for the night. Jeff and Susan talk about Colleen for nearly five minutes! 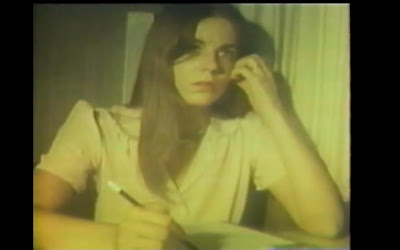 Colleen walks off into the forest and converses with someone (we only see hear her side of the conversation). She is apparently told that she has to do something. Then the theme music starts up AGAIN! The theme plays over Steve walking aimlessly in the forest for nearly a minute, then he sees something (that we don't see) and he runs away. Colleen tells Susan and Jeff about the ghosts, and Steve runs over to them, saying that they've got to leave. He says that he heard 'crying or moaning', then he saw someone. Colleen wants to perform a seance, and the group agrees. 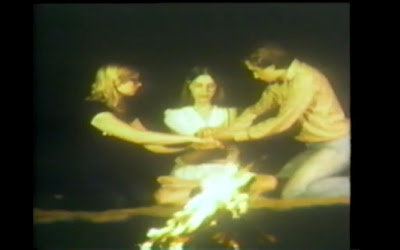 The seance is successful and the group become surrounded by confederate ghosts, who ask for their help...in...long...drawn...out...words, spoken in a ten-packs-a-day voice, which is almost impossible to understand. They talk for five long minutes about their history (something to do with their captain), and we get a flashback with their voice-over, until the theme...starts...again! Then, for the next seven minutes, a song (a different version of the theme-complete with lyrics) plays over confederates walking around and shooting. This is a lot more boring than it sounds. 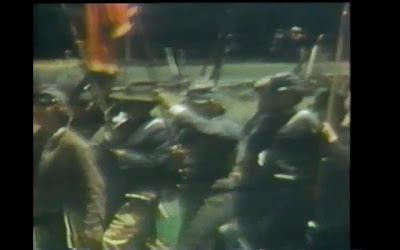 The ghosts continue explaining their story (taking over five minutes!) and they say that their captain was decapitated, and his head hidden, so his now-dead company of soldiers wouldn't pass over until they found his head. They tell the group that they know where the head is, and that Colleen is the reincarnation of the captain's wife. Then Steve 'helpfully' recaps what the ghosts have just finished talking about. He gets pissed about the ghosts wanting Colleen's help, as he has the hot's for her (no, that reasoning doesn't make sense to me either). Then the bloody theme starts AGAIN!! 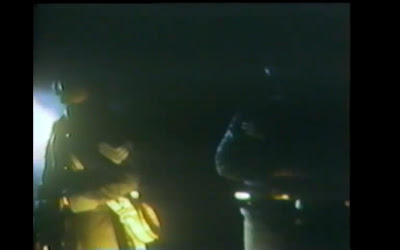 They find the skull and give it to the spirits. And the theme plays for this whole long over eight minute scene! And the characters stumble around in darkness for several minutes. The ghosts thank the group in voice-over, the group walk off, and the film cuts back to the bar. Steve tells the other guy that Colleen split up with Jeff, then the pair's dialogue continues even after the friend walks out of the bar on his own. Then the movie ends, no night of horror, just with that damn bloody them again!

This movie is wretched! The acting is terrible, the story nearly nonexistent, and the lighting is nonexistent and the sound quality is damn near inaudible! It's absolutely one of the most boring movies ever!...and I totally recommend it to anyone masochistic enough to watch it!