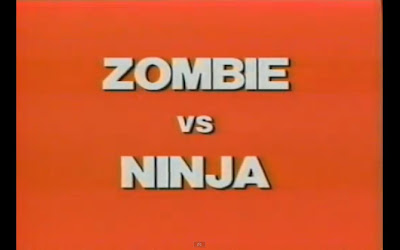 If there's something that I'm going to be reviewing more of, it's Godfrey Ho cut'n'paste films, I've only reviewed a couple (well, one Godfrey Ho, another Filmark). I'll start that off with Zombie vs Ninja, a film that stars the great Pierre Kirby! [For those unfamiliar with the films of IFD, here's an explanation]

After the IFD logo (a Columbia pictures logo knockoff scored to a copied Star Wars theme) the movie starts of with the trailer for itself, which is pretty schizo. The trailer calls the movie Zombie Rival: The Super Ninja Master, and the tailer voice calls it that, but constantly misses out the 'Ninja' portion of the title! 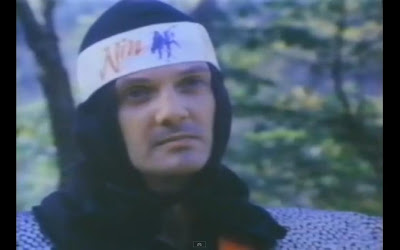 The movie opens with undertaker (dubbed with a bugs-bunny style voice, and with a couple of bits of carboard in his mouth, meant to be his buckteeth!), doing some ritual with paper, which makes a bunch of coffins behind him rise up, and the reanimated bodies inside come out. He fights them off until they go back in their coffins. 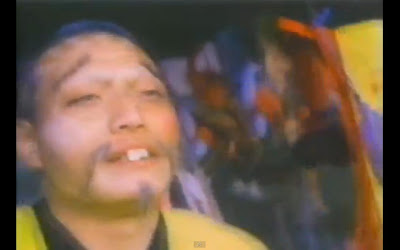 Next the movie cuts to the evil Mason (Edowan Bersmea) is talking with an Asian guy who is totally actually sharing screentime with Bersmea. The two intend to kill Chang, a guy who has gold. The film cuts to Chang, who intends to give his gold to 'the general', and he waxes philosophical to his friend about greed and stuff until his beaten-up son, Ethan (Elton Chong...I think) is thrown by his feet. Two henchmen arrive at the scene at demand Chang's gold. He refuses, and they kill him.

Undertaker rides around and comes across Ethan's body, lying in a ditch. He assumes Ethan is dead and takes him away in a coffin. Later, Ethan wakes up and is taken out of the coffin. Undertaker hurls him out after making sure he's not a zombie, then randomly decides to take Ethan as an apprentice. 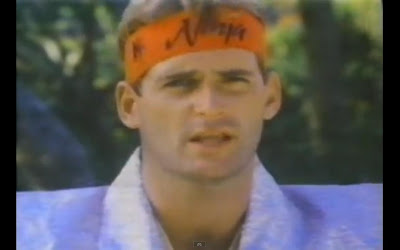 I bet you're wondering, 'where's Pierre Kirby, our hero?'. Well the movie was wondering that too, because twelve minutes in, the scene abruptly cuts away to PIERRE KIRBY! So as it turns out, Pierre (named Duncan in this movie), 'knows' the undertaker, and they have a 'conversation'. Pierre thinks Undertaker should train Ethan in martial arts, as he's in trouble. Pierre only gets about twenty seconsd of screentime though, and the film cuts back to Ethan, who doing jobs for Undertaker (and carrying coffins on his back! He's as strong as The Tall Man!). Ethan complains about stuff, gets into fights...and I'm going to stop talking about this plot for a bit and just skip to Pierre Kirby, who I haven't talked about yet except for half a paragraph! 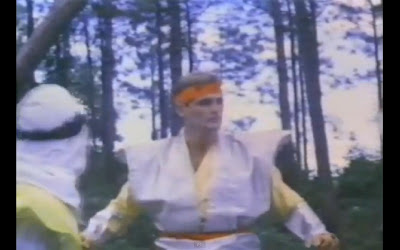 So, Pierre jumps down from the trees to two of Mason's henchmen (IFD regulars Dewey Bosworth and Patrick Frzebar (or Frbezar, it's spelt differently in different movies he's in)), and kicks the crap out of them, killing Frzebar. He tells Bosworth to tell Mason that it was a mistake to kill Ethan's father, and that 'The dragon's fire burns hot!'...as opposed to cold fire?! 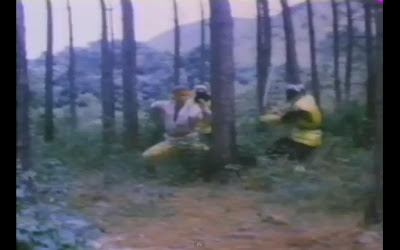 Meanwhile, Ethan's storyline has pretty much become a madcap romantic comedy. Movie B (Movie A in my eyes) comes back, and Mason and his henchgoon Ira talk about how when someone they gave gold to becomes emperor, their power will grow tremendously (yeah, maybe Mason can hire more than three workers!). Then Bosworth comes and tells Mason what happened (and it's here that Frzebar's character's name is said-Bobby!-a person in China several centuries ago named Bobby! yeah right!...and Bosworth's character is named Burt!). Mason says that 'the dragon's fire burns hot' is a martial arts technique that hasn't been used in centuries. He sends out his goons to try and take down Pierre for good. 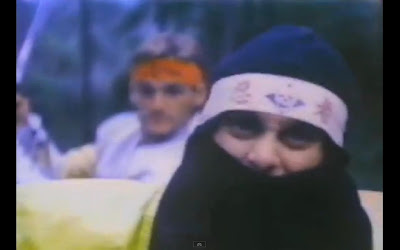 The goons find Kirby, and he takes care of all of them, except for one, who he has a tense standoff with, both of them standing still, waiting for the time to strike, all while dramatic music plays!...then an acorn randomly falls on the henchman and Pierre lunges forward and kills him! That really just happened!

As for Ethan, he does some more coffin exercises (he could probably defeat Mike and Reggie, what does he need more training for?). Then the man who sent the goons to kill Ethan's father gains control of the town from some government official. Meanwhile, Ehan is snowboarding with a coffin and crashes into said government official's...thing (those Chinese carriage things-what David Carradine threw a spear through into to kill the prince in Kung Fu). The official attacks Ethan, and this randomly makes the official's entourage break out into a brawl with each-other for no reason (ah, movies!)! 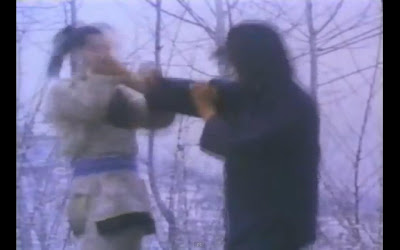 Ethan and Undertaker go out and Undertaker leaves the scene with a hilariously blase line (that I won't spoil)! Undertaker secretly raises a zombie (yay, the title characters are finally back in their own movie!) and it attacks Ethan, as a training exercise ("The kid's useless! He can't even beat up a zombie!"). Later, Pierre 'visits' Undertaker again and 'tells' him the he should raise more zombies to fight with Ethan.

So some stuff happens, Pierre Kirby fights more multi-coloured ninjas, and a scene in the movie repeats itself like a skipping record! Eventually, both Ethan and Pierre go after their respective enemies... 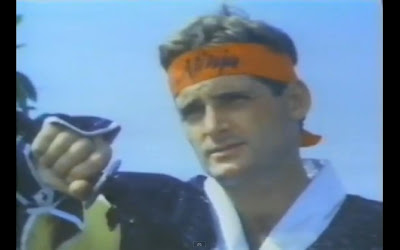 Zombie vs Ninja is a fun movie on it's own, what wth the goofy dubbing and plot, but there's one massive problem with it-Pierre Kirby has less than ten minutes of screentime! What little Godrey Ho footage there is is fun, full of ninjas, silly names, a main villain with whose terribly dubbed, and Pierre Kirby doing his thang-walking around random forests, beating up evil ninjas! As for the Ethan storyline, it's cool, (and there's quite a bit of 'zombie' action in the last half) though it gets in the way of the IFD action.

There's not much else to say about Zombie vs Ninja. One last thing before I finish up. Can anyone tell what Pierre Kirby's accent is? It's either Australian or British, I can't tell which (it's at 1:08 in the clip below).