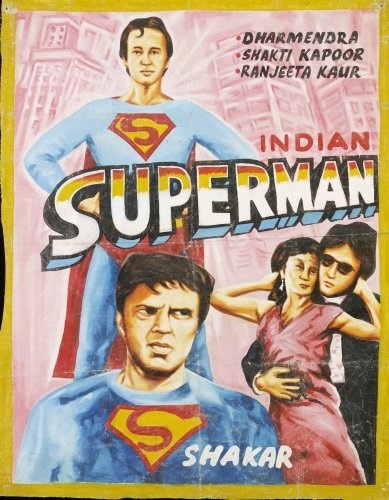 While Dariya Dil was certainly a fine movie, and the fantasy sequence was more than satisfactory, I'm still feeling a hankering for a Desi Superman...So isn't it good then that the previous year there actually was a proper Bollywood/Indian Superman film!

Mild mannered reporter Shekhar has a secret. As a baby, he was found in a crashed rocket by an Indian couple, who raised him as their own. Years pass, and the boy discovers he has a unique gift. Now all grown up, Shekhar uses his great powers to defend the innocent. He is-Superman!... 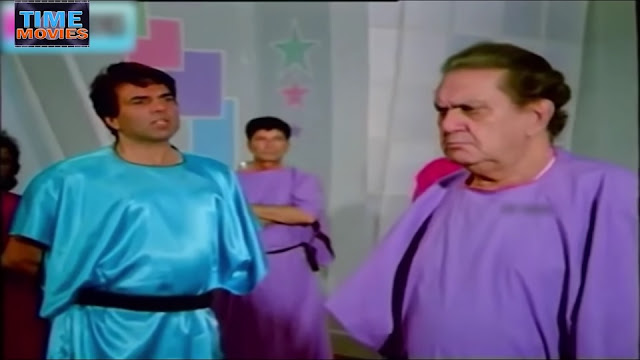 1987's Superman is a mixed bag. Basically a recreation of the 1978 classic of the same name, it adapts the material well, with a distinctly Indian flavour. At 'only' two hours, it's quite short for a Bollywood film, and god knows it's shorter than the real Superman movie, which was a full half hour longer, but this still manages to have pacing issues. The origin is presented well enough, but things soon get bogged down in infrequent but endless musical numbers, extended comedy scenes, and other such distractions.
When it starts trying to be it's own thing, it's actually quite fun, but that's over an hour in! The film is most interesting when it's trying to be its own thing, rather than aping the original. When it does that, it's so obvious and ill-fitting. 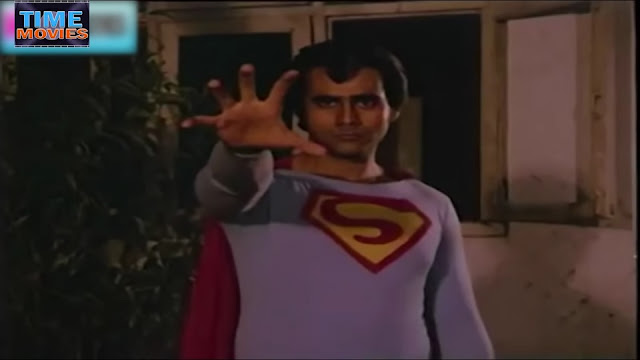 As far as cheesiness, this has got it in spades. It's just the right amount I think. Cheesy enough to be funny, but not so much that it turns the thing into a farce. The moment that had me laughing the most was when the villain actually sees the earth spin backwards and the damage reversing on a monitor as time rewinds!
The characters are what you'd expect from Superman. Shekhar is your typical Clark Kent, noble, but always a bit hapless. He almost gets his girlfriend raped because he decides "Just let me go to the bathroom for a minute" is a good excuse when you and your ladyfriend are about to spar with the thugs who shot at you earlier. He must've actually gone to the bathroom first, because for a man with super speed he sure takes his time getting changed! 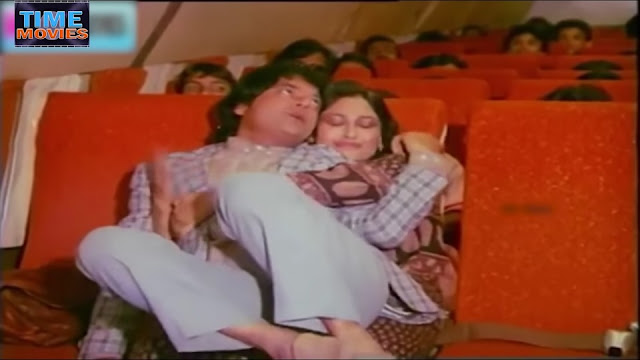 The most altered character has got to be the Perry White analogue, who's played by the comedian Jagdeep, turning this gruff and grumpy senior editor into a younger and more comical character, towered over by everyone else in the movie. For some reason every female character in the movie throws themselves at him, and he's bizarrely not interested. He's mostly annoying, especially when it comes to how much time he takes up, but he's not all bad. I liked the 'Zambian' muscle girl, and their brief relationship.

The villains in Superman are a fun cadre of classical baddies, led by the Lex Luthor equivalent Verma. With his luxurious locks, he doesn't bear the slightest resemblance to the comic character, but he acts satisfyingly villainous. 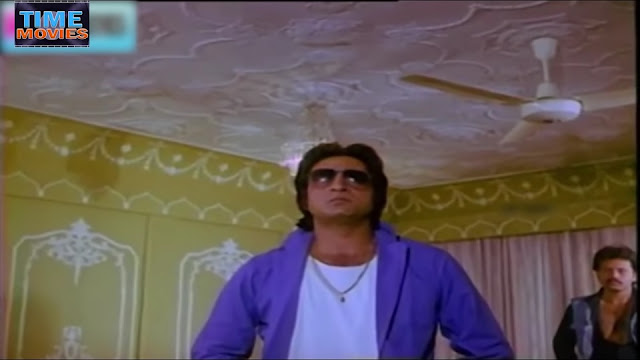 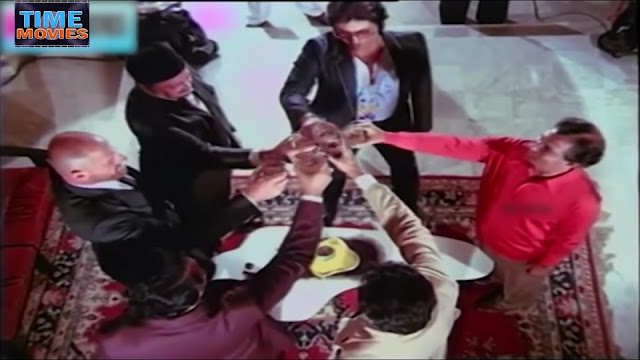 Aside from all his other henchmen, the villain also employs a squad of killer ladies, who all dress in glittery red t-shirts, with insignias making them look like Superman Groupies. The head one almost becomes this film's equivalent to Miss Tessmacher after witnessing the baddie murder a man. She acts shocked at this...despite having earlier stabbed a man to death with a broken bottle.

Given this is an Indian film, and openly called Superman, I don't think it'd be fair calling it a ripoff. More of an unofficial remake. Where it starts to border the line though is in its theft of the original is in its lifting of scenes directly from the 78 picture, darkened so we can't tell. The stock footage of the original is mixed pretty well with some of the shots, and the character reactions. The original effects here though do leave a lot to be desired.
As a Bollywood film, this is occasionally broke up by the odd musical number. As far as songs go, they're not bad, and tolerable enough, and choreographed decently. Their biggest drawback is in taking away time from the titular character beating up bad guys. 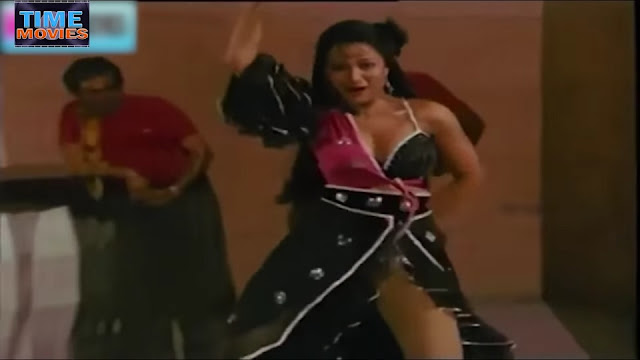 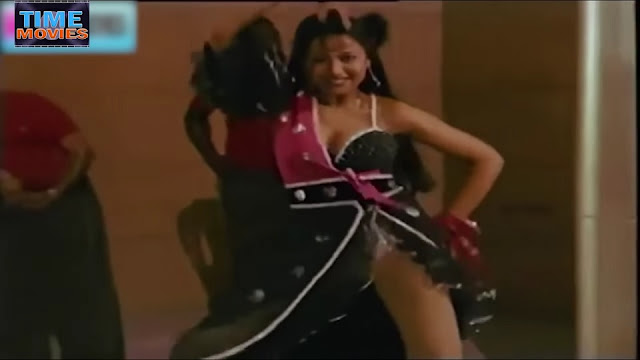 The acting here is all pretty decent. Puneet Issar gets across both sides of Superman's character well enough, while Someone (couldn't find their name) is a fun presence as Gita. Despite looking more like a brash young greaser than a bald businessman, Shakti Kapoor is more effective a villain than Gene Hackman ever was in the role. Less impressive however is Jagdeep. I've found him funny in other movies before, but here I found him pretty unbearable. There are plenty of other familiar faces here to Bollywood fans, such as Bob Christo, Preeti Ganguli, and Ashok Kumar. 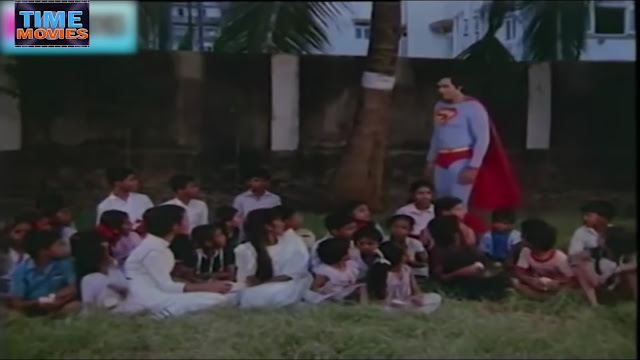 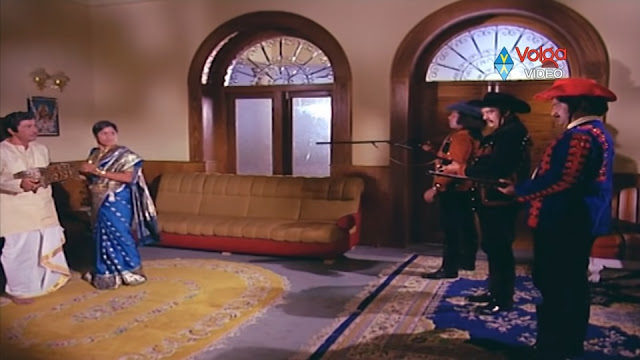 Young Raja's parents are murdered when he is a child, and in response he prays to the god Hanuman, who grants him superpowers. Years later, the grown up Raja fights crime as Superman, when one day he uncovers a conspiracy orchestrated by the very men who killed his parents... 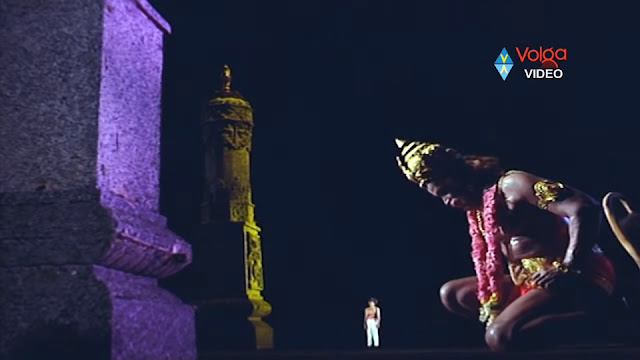 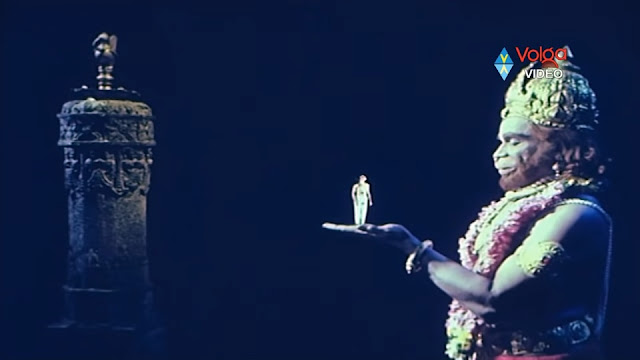 Whereas the Hindi Superman was basically a localised remake of the Christopher Reeve film, this earlier Telugu effort is more of its own thing. The film opens up more like Batman than Superman, and the origin is changed to replace the sci-fi stuff with Indian mythology, as Superman is no longer a boy from Krypton, but a regular human blessed by the Hindu pantheon. 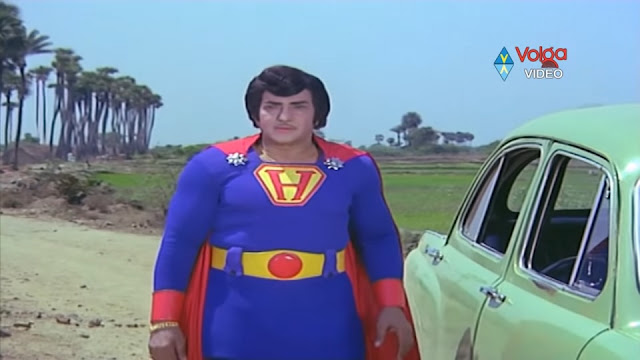 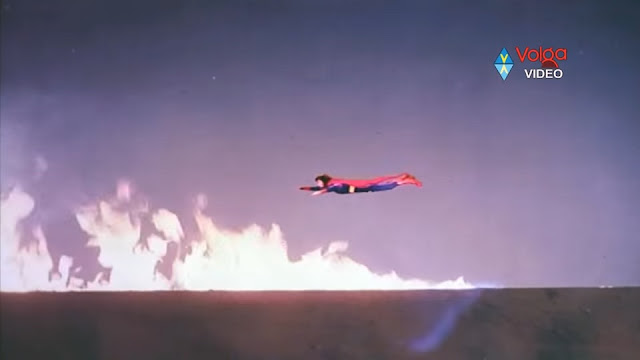 The film is quite episodic in nature, almost like an old movie serial. In one 'chapter' we've got Superman fighting a deranged wild game keeper, and in another he fights an evil cult, then matches wits with a sorceress, etc. These little adventures are fun to watch, but where the movie falters is in its overall plot. It's boring! It's just a lot of faffing about in big office buildings, people in suits having meetings, and a lot of fuss over a random rock.
The climax is the most jarring part of the movie. Instead of the final fight being between Superman and the main villain, it's like the producers realised that a portly older gentleman wouldn't be much of a final opponent, so we suddenly get a supernatural battle with a witch and demonic spirits.
The whole last act is fairly disappointing. The weak climax, coupled with an abrupt ending, and a plot that's just gotten fatigued. Ordinarily Superman fighting witches and demons would be fun, but here I just felt tired. No matter what was thrown at the screen I just wanted it to end already. And having a rushed ending felt like the biggest insult. So a two-and-a-half hour film has enough time for drawn out conversations or dancing, but not for a proper denouement? 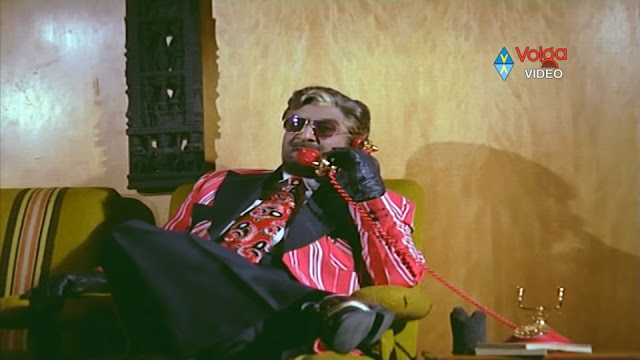 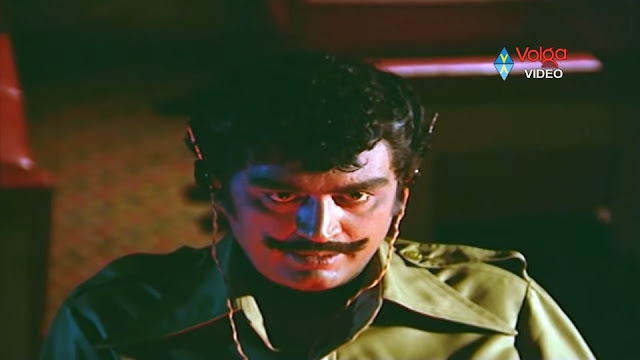 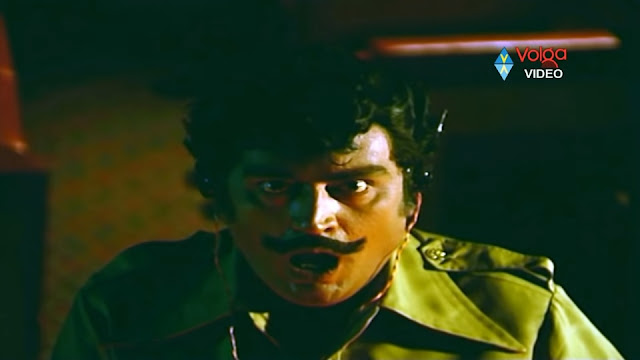 Far from being a nerd like Clark Kent, protagonist Raja dresses like a pimp, and has the appearance of one too. This Superman has a propensity for violently killing his enemies, even when they're down. Come on, man, haven't you ever heard of prison? He even sics an evil spirit on the sorceress, and snaps the main villain's neck! That's not cricket, Superman!
The villains are a colourful and menacing bunch, even if none stand a chance against Superman 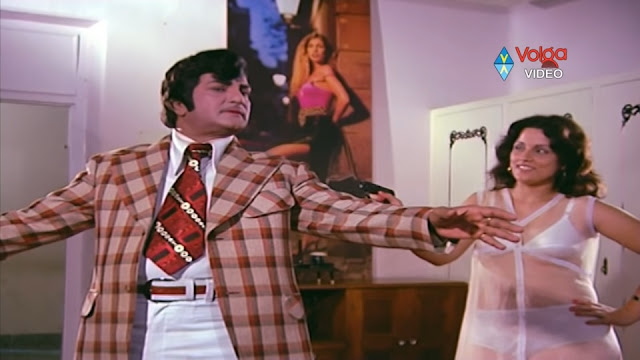 One thing the movie also has no shortage of is hot babes! Often snazzily dressed too, they are a treat for the eyes. Although we probably could've done without the terrifying bathing scene with the old man.
Superman's costume is really well designed, with a unique insignia, and colours that really pop out. 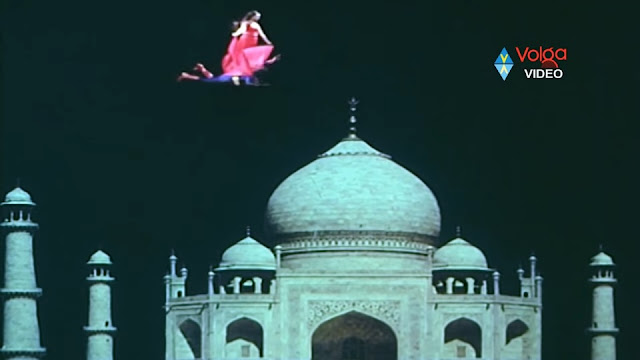 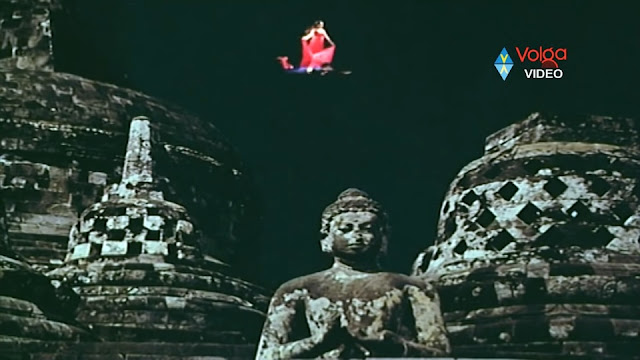 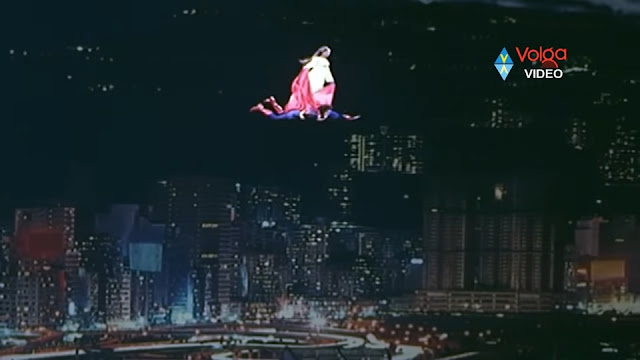 The direction in Telugu Superman is really good, with some distinct imagery, including the flying sequence, where the love interest rides on him like a cosmic surfboard!
The dance choreography here is fun, with everyone pulling off the moves  No surprise, since this is India. No matter what language they're speaking, they can be counted on for perfect dancing.
The fight choreography though? Errr...  Some of the regular are decent enough, but where the film loses major points, or gains them depending on your point of view, is in the unintentionally hilarious fake slaps! The elephant 'fight' is impressively done though, not only because they managed to do it period, but also without inconveniencing the elephants much, by the looks of it. 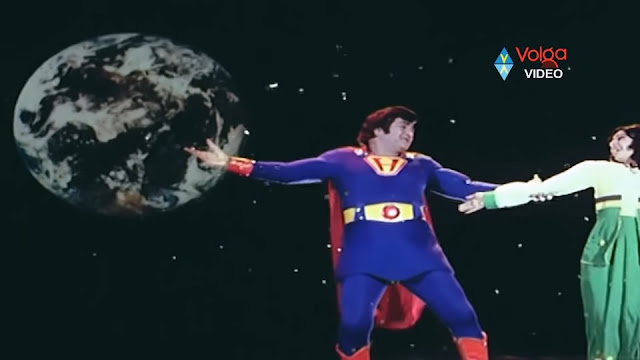 The actors all do good jobs here. Supremely cheesy, but enjoyable and competent, from the garish heroes, the gorgeous ladies, and the diabolical villains. N.T. Rama Rao makes for a good lead, and I was shocked to discover he was almost 60 here! He looks 30, but he's older than his foster mother, and 40 years his love interest's senior! I know his hair looked weirdly black and slicked, but I thought he just used too much hair product!
The effects are a high point for Telugu Superman. We've got a giant Hanuman early on, which interacts well with others and his surroundings. Superman's flying is reasonably convincing, and while other effects like the fire on the road are clear in how they were done, they still look neat. 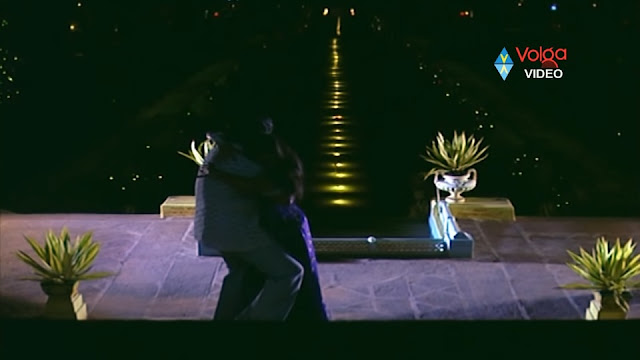 While in some ways superior to the Hindi iteration, a few things drag Telugu Superman down, some its own fault and some the fault of India's cinema. But it's still a fun time to be had, and captures Superman and his adventures well...
Posted by Chris Hewson at 7:51 AM