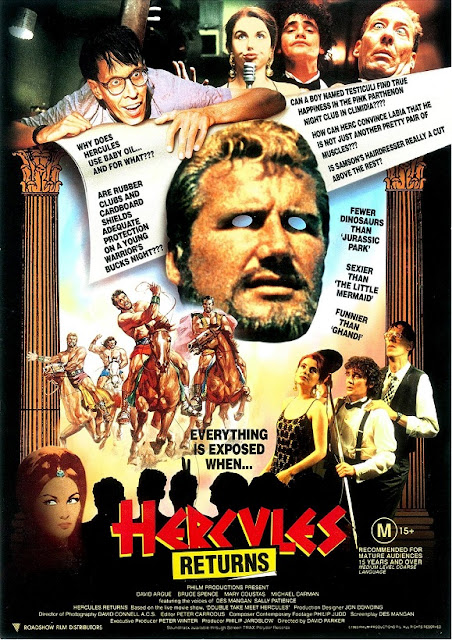 Brad McBain is a disillusioned employee working for a soulless cinema branch that threatens to completely annihilate the classic moviegoing experience. Brad makes up his mind and quits, intent on refurbishing the old Picture Palace and making cinema an event again. To commemorate the occasion he and his friends decide to open with the last movie to play at the Picture Palace-Hercules. Unfortunately his evil old boss swaps the prints, leaving the trio stuck with the Italian version. Now forced to improvise, the audience witnesses the gripping story of Hercules journeying to the Pink Parthenon in the land of Clamydia, where he meets the young maiden Labia, and must defeat the villains and achieve his dreams of becoming a nightclub singer... 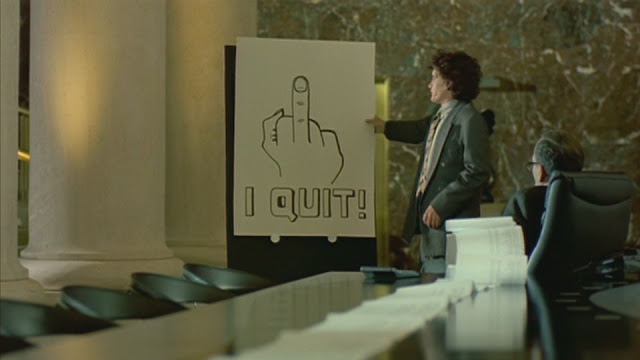 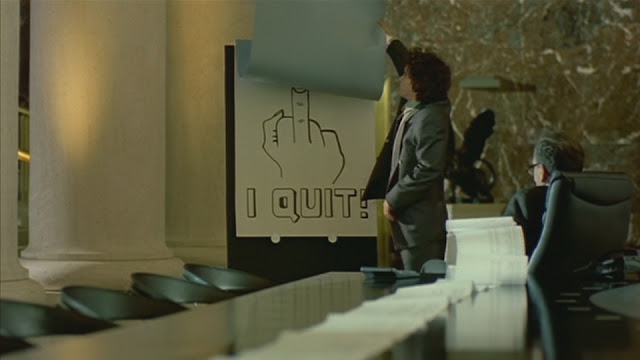 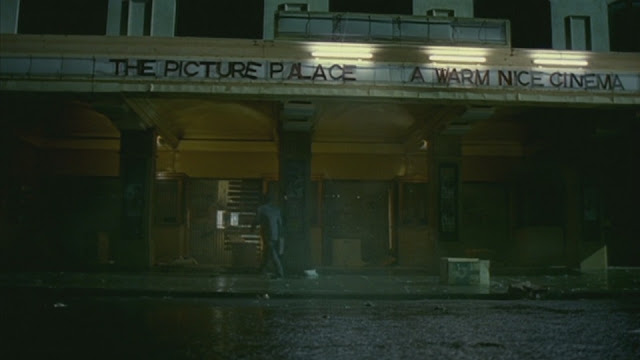 Hercules Returns is a great Aussie comedy in the tradition of sword-and-sandal comedy dubs such as The Auntie Jack Show's Herco the Magnificent, and a similar sketch from The Paul Hogan Show. The first 12 minutes are devoted to the 'real world' characters, but as soon as the movie starts, the rest of Hercules Returns is devoted to the overdub, with brief cutaways to the  trio doing the improvised sound effects. The film does eventually return to them, though for a quick ending. 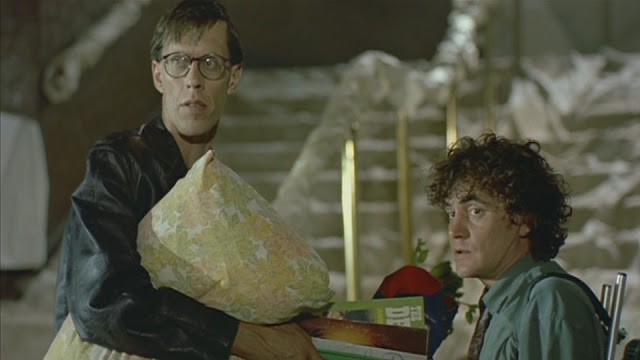 The dialogue in this movie is bloody hilarious! You've got ancient Greeks using Aussie slang, like "Grouse!", "Excuse me, mate, is that bloke in there Samson?", and "Hercules, this is the man I love. He's really tops.". Other funny lines are "Get real, mum, I'm not marrying someone with bigger tits than me", and the greatest euphemism for being gay I've ever heard. 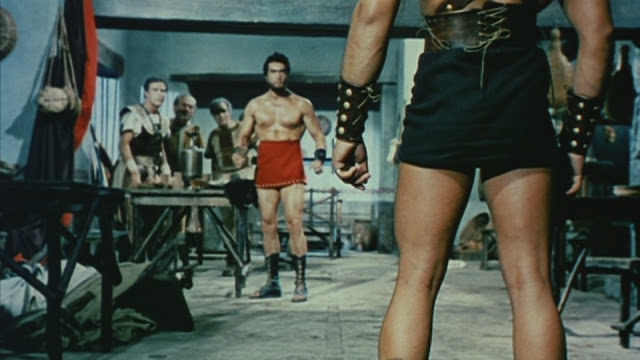 In the past I've discussed similar things to this where the new material really didn't gel with the original product. Here though, it works. I wonder if this is because we know the characters who are doing the dubbing, or just the quality writing on display. I'd say it's a bit of both, leaning towards the latter, because this likely wouldn't work half as well as it does if the writing wasn't on point. 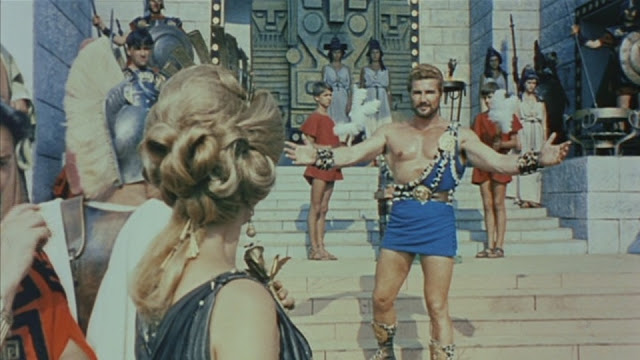 I also  wonder how many characters in the audience figured out what was up from the get-go. It's implied they didn't, though I like to think they all realised the managers did this all on the fly, by the seat of their pants, and appreciated the finished product that much more because of how great their efforts at improv were.
The characters are a fun bunch. Brad is a meek but industrious lead. It's great seeing this nervous guy make a change with his life and successfully take the reins of a passion project like this, to spread good old-fashioned merriment and entertainment. It's also funny seeing how ostentatiously this meek guy quits his job! 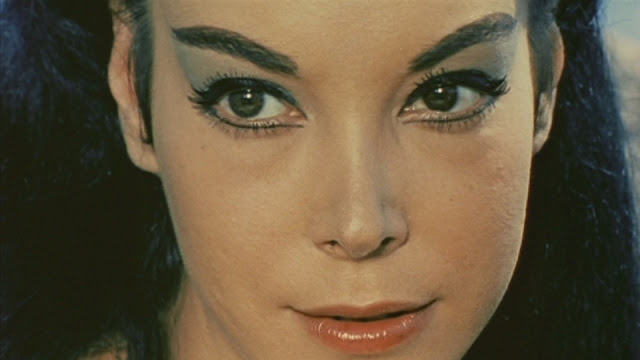 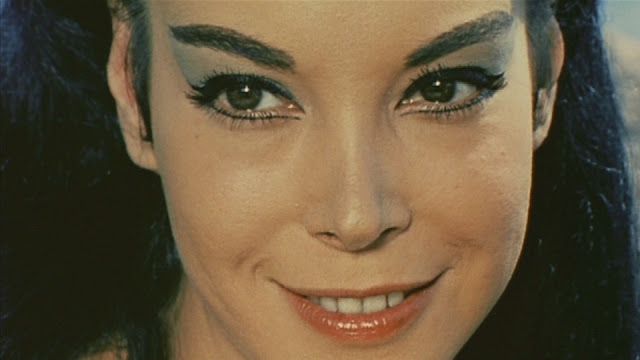 David Argue, Bruce Spence and Mary Coustas, are a great trio. Argue is likeable and occasionally manic, Spence is an over-the-top and weird, but fun, and Coustas is spunky! Michal Carman is delightfully evil, while his aide is some amusing comic relief. Despite being the only in-universe people doing the voices, there were actually a few more participants, from Des Mangan, to Sally Patience, and others (including the main trio). These voices run the fine line between funny and grating. Some are deliberately over-the-top, and whether or not they're funny, or obnoxious and annoying for you is up to the viewer. 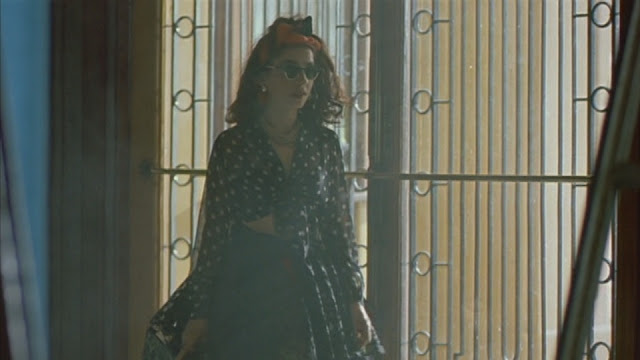 An area I feel the movie both excels in, but is also harmed by is the framing story. In only 12 minutes, plus a couple more at the end, it's a fun and engaging story, with a complete beginning, middle, and end. Nothing feels unsatisfactory or left out...but it's just so rich with promise that you can't help but wish it was the whole movie! It's a tough dilemma. On one hand you wouldn't want the movie as it is changed, because it's hilarious, not to mention unique. But it also would've been awesome getting these characters and their story as a regular movie too!
While the denoument is a tad too abrupt for my liking, the movie still plays us out in a good way, with a fun song recounting the events of the film from the lounge singing showman Hercules. 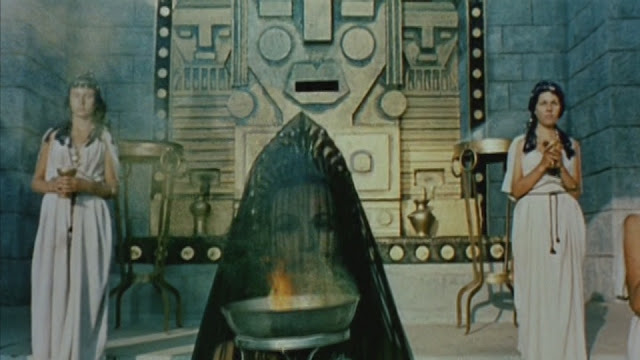 Before I wrap up, there was something I felt I wanted to do this time round watching the film, and that was check out the original film! I wanted to see how it compares when seeing the source material in its serious context. I found it to be a typical sword and sandal picture. A little overlong but enjoyable all the same. An interesting touch is that it seems to have a bit of a sense of humour all of its own. From Zeus's errant thunderbolts, to the antics of the dwarf, and the constant surprised looks to the camera, this has its fair share of comedic moments for a peplum. One last thing, I really appreciate how the end of the film credits the cast and crew of the original Italian production, too! Bloody tops. 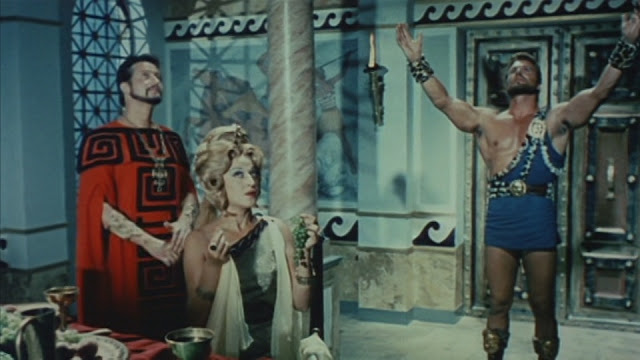 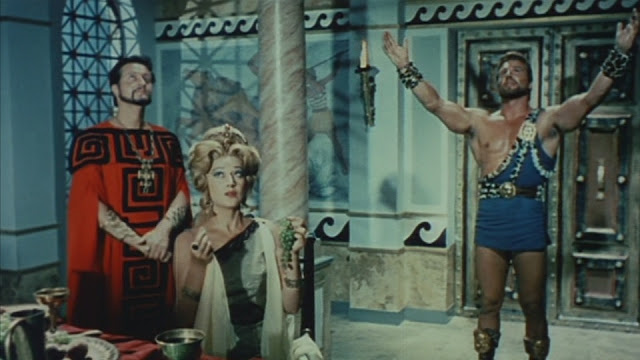 There's not much more to say about Hercules Returns. It's a very enjoyable experience, and really makes you yearn for what cinema once was, and could be again...
Posted by Chris Hewson at 8:18 AM