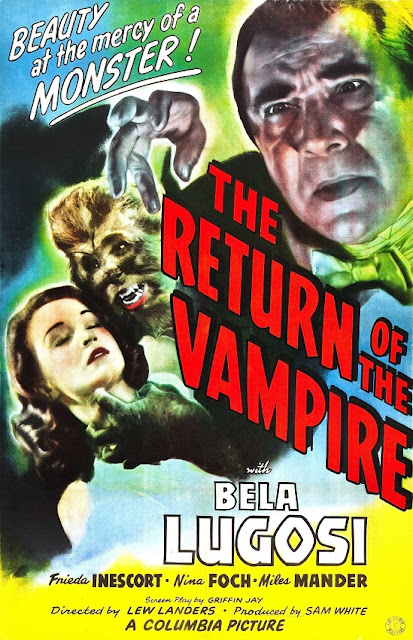 After a series of unexplained deaths, a learned professor has just discovered the existence of a vampire. He and his nurse manage to stake the monster in his coffin, and the danger seems to be over. Years later the Second World War is raging, and German bombing raids uncover the vampire's grave, and when two workers see the body, they assume the stake is bomb shrapnel, and helpfully remove it. Life returns to the villain's body, and he sets his eye back on the family that cursed him to death for so many years... 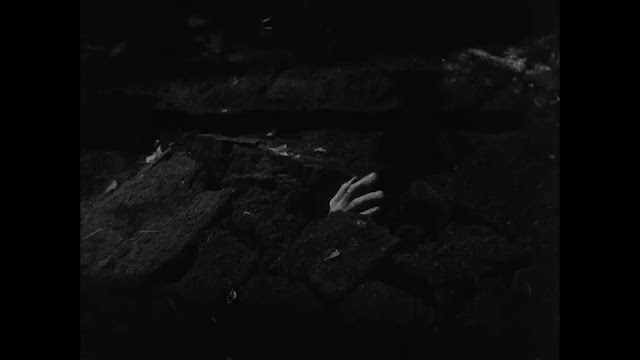 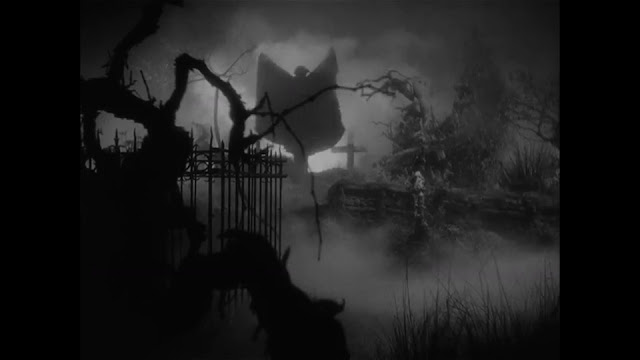 Return of the Vampire is a really special film, and a true hidden gem! The 1940s horror cycle yielded a lot of good stuff, and a few classics would emerge every now and then, but some flew under the radar, perhaps none moreso than this Bela Lugosi vehicle.
The film gets off to an immediately thrilling start, wasting zero time. It introduces the heroes, the villains, and the story in rapid succession, before settling into things after a time skip. The settings are both very interesting too, with a WWI beginning, and the remainder in WWII, the two settings mirroring each-other in a subtle way.
Return of the Vampire is seen by some as an unofficial sequel to Dracula, and it kind of is, from the casting of Bela Lugosi, to the very name of the film. But not only do rights issues mean this is Dr. Armand Tesla, not Count Dracula, it feels like the writers actually made an effort to have their vampire stand out, and he does! I mean, it's still Bela playing an evil vampire, but he really feels like a new villain, with a distinct feel, even if his motivations are the same of any vampire. 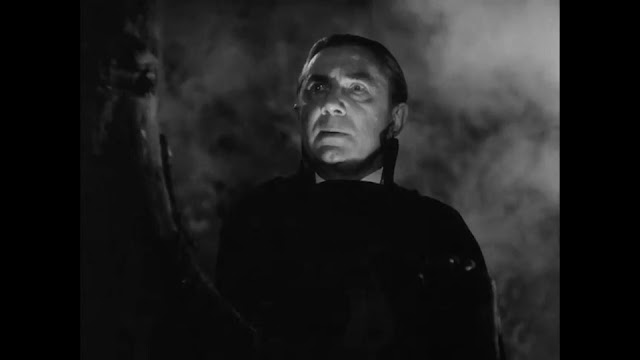 What really struck me about this film is how smart the characters are. Normally in horror movies you're yelling at the screen "No, don't do that, do this!", but the fantastic thing about this film is that you wish the characters would do the smart thing...and they actually do! Nothing stops them, not even the easily understandable distraction of a werewolf trapping them in the crypt.
Even without counting this positive, the characters are still great. The professor doesn't make it beyond the time skip (with an unnecessary and probably posturing hand-wave explanation by Tesla), but Lady Jane stays as the film's defacto protagonist, getting to hold the limelight rather than the young and pretty pair. She's a surprisingly strong female character for the time! 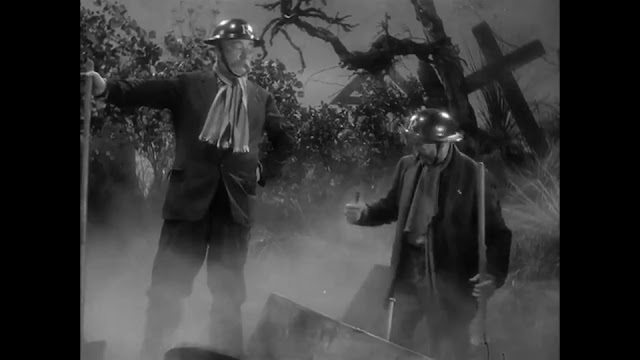 Jane's son and the professor's granddaughter are decent, although appear surprisingly little. He vanishes altogether near the end, while she has a more substantial role, as Tesla's intended victim.
The most surprising character is definitely Tesla's werewolf servant Andreas. He begins the film as a slavering henchman, but once his master is staked, he becomes human again, and the time skip is very kind to him! He now works for Lady Jane, helping her in her studies just as she helped him recover his humanity after the vampire's mind control was broken. 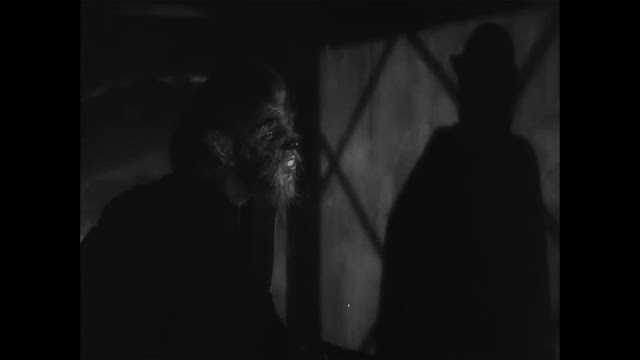 Once Tesla is resurrected, things begin to go awry for poor Andreas, and he is helpless under his master's control once more, becoming the loyal henchman again. But the impressive thing about his character arc is how it ends! Lady Jane isn't exactly a physical heroine, and the two young ones don't get to appear much, so who does that leave to save the day at the end? Why, none other than Andreas! He manages to break the hypnotism all by himself, and really goes above and beyond the call of duty to vanquish Tesla, despite two different major injuries! It's really unique to see a monstrous henchman with not only this much character, but such a proactive role in defeating the villain. 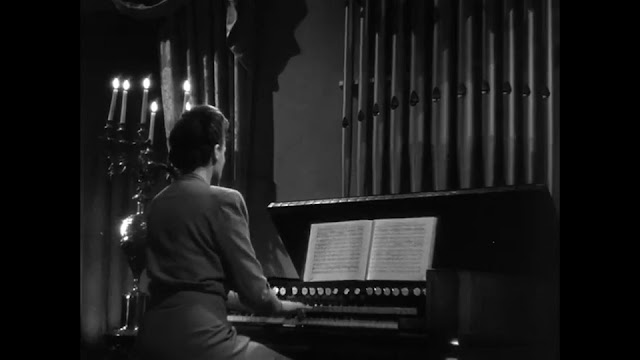 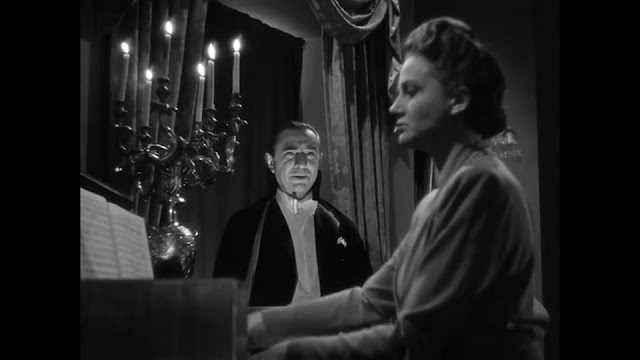 The direction by Lew Landers is wonderful, with many interestingly staged moments. The best scene is perhaps the exchange by the organ, which features not only great visuals and dialogue, but acting too! Everything comes together perfectly, and it's a classic scene not talked about enough.
While generally a serious affair, the movie has a few amusing moments. There's the comic relief gravediggers, the hilarious idea that vampires can be knocked unconscious, and the police chief's growing skepticism. It can be a little annoying how much he plays the skeptic, although it leads to a very cute ending. 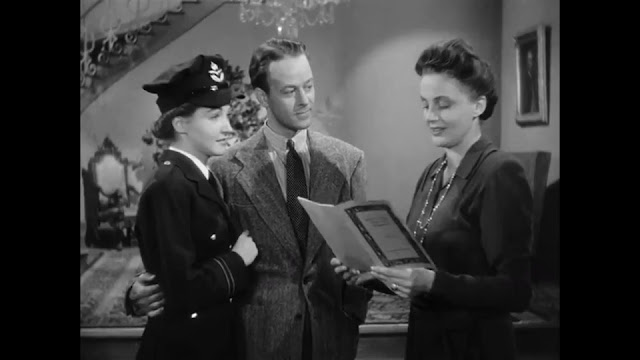 The effects in Return of the Vampire are surprisingly good! The standout is Andreas's werewolf make-up, which is really impressive, maybe even moreso than The Wolf Man. Made even better by the fact that he talks in his werewolf form, all the time, and the make-up still holds up! Figuratively and literally.
The acting here is great. Bela must have really relished this role. He wasn't overly fond of playing vampires since he wished to avoid typecasting, which is why he only ever played them in three other movies after Dracula, but you know he was a pro at the part. Here he is more than just a basic vampire going "Rahh, I vant to suck your blood!". Tesla is a fleshed out character, with lots of dimension for Bela to sink his teeth/fangs into. 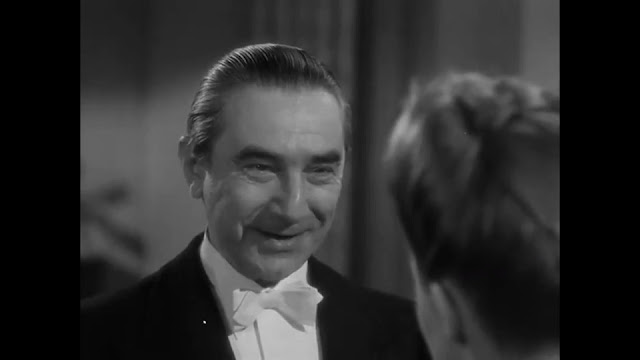 Matt Willis does well as Andreas, while Frieda Inescort is good as Lady Jane. Though she also gets the absolute worst line delivery I've heard in a while at one point. Nina Foch and Roland Varno are nice, though underused,  while their child counterparts do well too in their brief screentime.
Return of the Vampire is a true unsung classic. It may not have been noticed by many on its original release, but I hope that as time goes on it'll become lauded as it deserves...
Posted by Chris Hewson at 7:59 AM