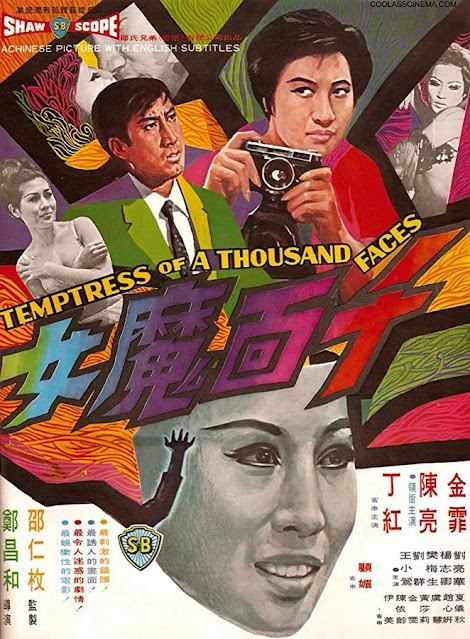 Tenacious reporter/policewoman Ji-ying is investigating the latest spate of robberies by the sinister Temptress of a Thousand Faces, a female criminal who's holding the country in a panic, striking with anonymity. When Ji-ying gets too close, the Temptress kidnaps her and begins to commit crimes with her face. The cunning girls is able to escape though, and the arch-villain may have her hands full if she's to stay on top... 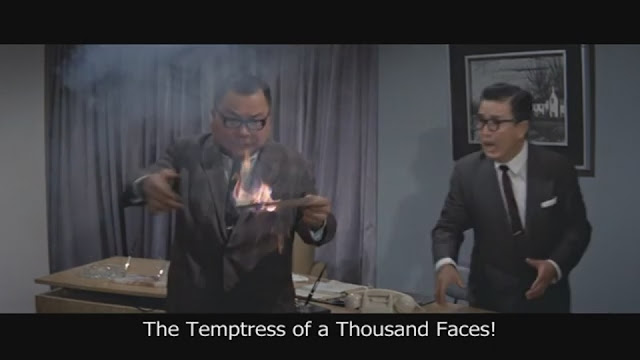 Temptress of a Thousand Faces is a real treat! Coming from Hong Kong, it's a stylish supercriminal film with much to enjoy. It runs at a brisk pace too, at under 80 minutes, bouncing from one entertaining setpiece to another. There's a lot of action, with plenty of variety too, including a few chase scenes. While not an outright comedy, there's a nice sense of humor that gives it a fluffy tone.
The film is a perfect encapsulation of the 1960s, from the fashion, to the tone, and overall aesthetic. Feeling like a mix of Diabolik and James Bond, there's a nice variety of gadgets too. The Temptress leaves explosive calling cards, letters with disappearing or changing ink, and has a few other nifty items. The villain's lair is also pretty packed with nefarious devices, like a trap door, fantastical machines, a cage trap, etc. I only wish these things were shown more evenly, because we'll see one, then more than half an hour will pass before seeing another. Almost half the film! 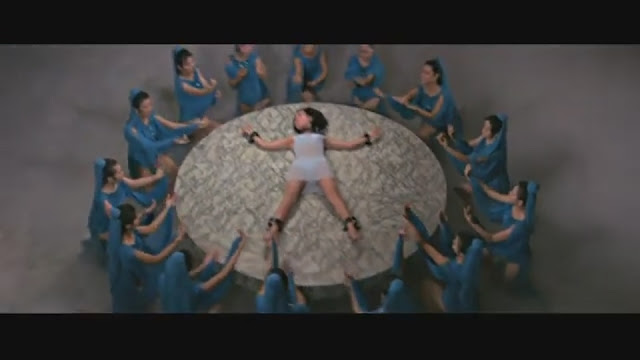 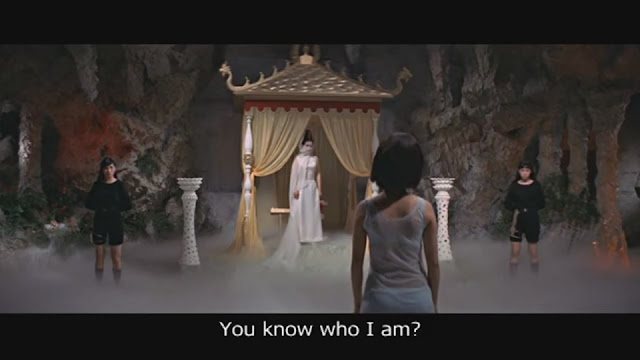 The characters in Temptress are an engaging and amusing bunch, but there is one problem I had-They all look the same! I could not tell if Ji-ying was the police officer, or the plucky reporter, not helped by one of said characters completely vanishing. It's ironic that the characters blend together so much in a movie about just that. There's a throwaway line at the end makes it all the more confusing.
Ji-ying is a fun protagonist. She's a spunky and cute girl, who is not only resourceful, but a total badass too. Just when you think she's helpless, held captive by the Temptress and her gang, she fights them off barehanded, in her underwear! Colour me impressed! 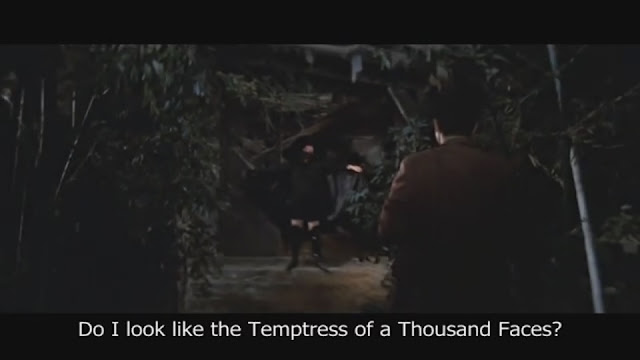 Her boyfriend Yuk-dat on the other hand is a bit of a dope. He's nice enough, and has his moments of ingenuity, like faking a robbery to exonerate Ji-ying, but his lowest moment comes when the dumbass doesn't realise the Temptress is coming onto him, not his girlfriend, and he totally nails her! You two are gonna have a complicated time in therapy!
The titular Temptress is a neat villain. Always scheming, and talking like a professional supervillain should, she's always fun to watch. I was enjoying seeing what she'd plan next, and how the heroes would stop her, if at all. It's just a shame that she really only uses like 3 faces in the entire movie! A thousand? I wish! 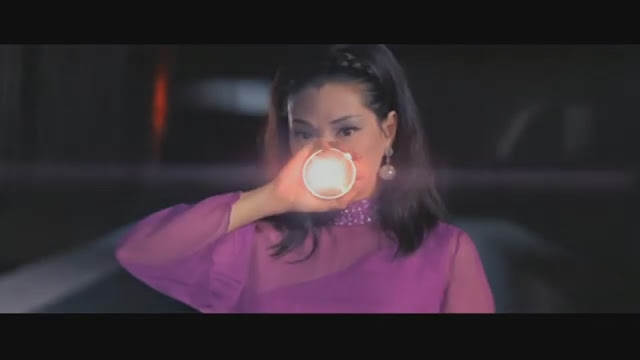 The rest of the cast contains a seasoned police detective who's a bit of a skeptic, but sees reason eventually, and two comic relief cops, who bumble their way through multiple situations and many demotions, before getting a surprising role in the climax! Where are the heroes when the Temptress needs to be stopped? Stuck in a cage. It's these two klutzes who end up saving the day!
As this is a Chinese film, and from Shaw Bros no less, the action is predictably great. We've got well-choreographed fights that have lots of dynamic moves, hits that we really feel connect, plenty of flips, jumps, and lunges, and more. A highlight is the mind-boggling fight scene between Ji-ying and 'herself'. We lose track of who's who long before the end, but that's alright. That is the point after all, and her boyfriend feels our confusion!
The chases are neat, with the best being the dash between buildings, which is fantastically handled. Ridiculous? Yes, but no less fun and breathtaking to watch. It really sells the heroine as being a ballsy lady! 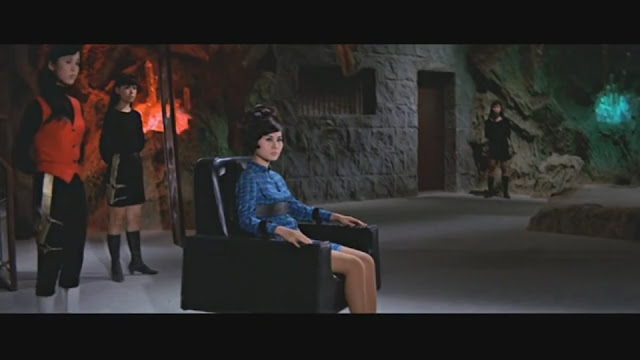 The climax is a nice cap-off to the movie, even if it does stretch credibility that Ji-ying and her journalist boyfriend are able to fight the Temptress's entire private army all by themselves, hitting every target like a crackshot (and apparently having no qualms with killing dozens of people). 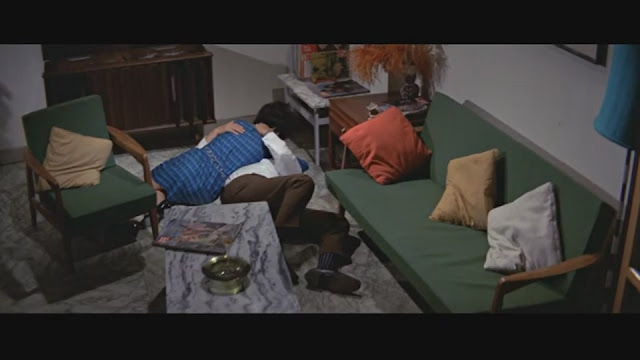 One of the most enjoyable things about Temptress of a Thousand faces is how sexy it is, with many moments of scantily clad women, in various states of undress. And it never comes across as sleazy, either. Not to me at least. It had a sort of innocent charm to it, if that makes any sense, coming across as playful rather than leery. Although it does verge on the ridiculous when Ji-ying has her second fight with the bad guys in her underwear, it's a great scene, so there are no complaints from me. 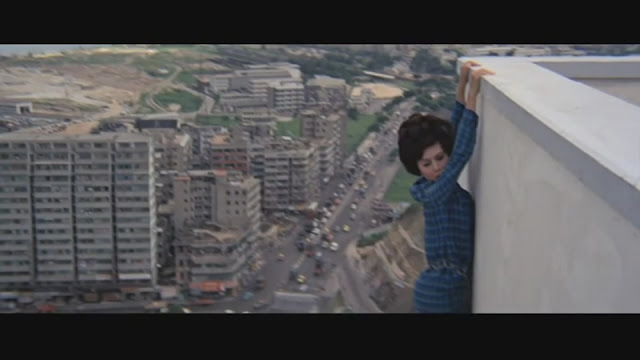 The effects here look neat! From the gadgets, to the gunfights, the face-changing, etc. Especially Ji-ying's death-defying leap. The settings all add to the movie, with a neat villainous lair, great natural locations, and the bustling streets of Hong Kong. The fashion is neat too, helping give the movie a really colourful and vibrant look. This is never visually boring.
The actors all do a good job. They all play it straight, but with enough lighthearted charm to really sell the parts. It also helps that these women are all drop dead sexy. 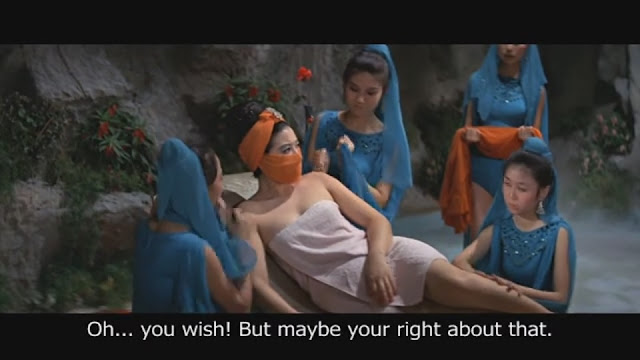 The Temptress of a Thousand Faces is a great time to be had, and I recommend it highly if it sounds like your thing. The Chinese really had a talent for movies back in the day, and this is the perfect example...
Posted by Chris at 7:37 AM