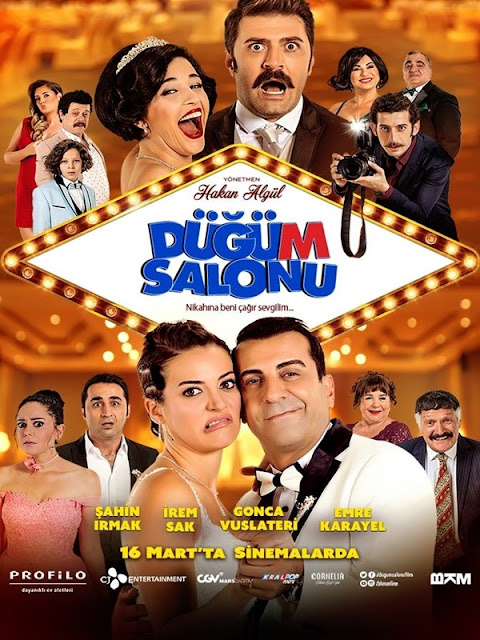 Serkan is soon to be unhappily married, to a loudmouthed drama queen. As they prepare for their nuptials, the next salon over also has a wedding, the bride equally unhappy about her situation. Hulya turns out to be Serkan's old flame. They split up after she discovered him cheating, and both have been unhappy ever since. Hulya has given up on love and settled for the first man to come along, while Serkan insists he was framed. The two meet again and share a sudden kiss, which winds up causing no end of trouble when there's a witness. Now they must try and prevent the truth from coming out if they have any hope of saving their new marriages... 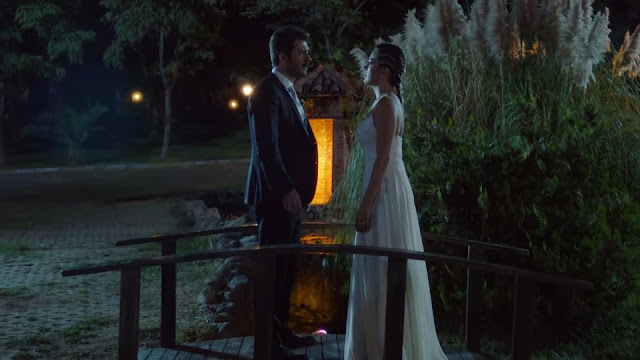 Düğüm Salonu is a real hoot of a film. Ir shows why the Turks are at the top of their game with rom-coms. There's an engaging story, a likeable cast, and a neat setting.
I like how the structure for the first half isn't your typical 'estranged couple fall back in love', but rather these two meeting for 5 second, making one mistake in passion, and then having to deal with with the ramifications despite having otherwise gone their separate ways. Of course the movie does eventually get to the romantic reunion part, as we hoped it would, but in a more patient way. 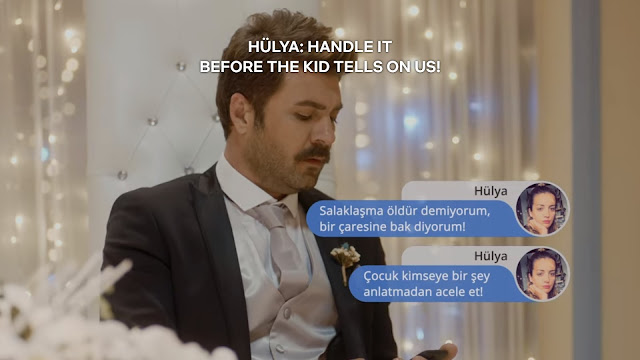 Düğüm Salonu opens suddenly, in a way that I wasn't expecting, but didn't necessarily mind...until I realised the whole movie takes place over the course of a single night. After which I wondered why the heck a movie set in such a limited location was wasting time starting so late in the action! I decided to give the movie the benefit of the doubt though and wait till the end before judging. As it progresses, things do indeed get better.
While the majority of the film takes place in the one night, the overall structure is slightly non-linear, with many flashbacks, and even flashbacks within flashbacks! That does sound crazy, and it is, but thankfully it's not handled too poorly. These flashbacks all serve a good purpose, and while they may break up the immediate action for some, they do a good job in building up these characters and their world.
Despite the small setting, there's always plenty going on. The chases with the kid, and the antics with the blackmailer. I liked the inclusion of that subplot, as it means there's a little something extra, and the action doesn't just consist of shaking down or chasing a single child. Though it does get a bit hard to swallow how hard it can be to just delete the photos. 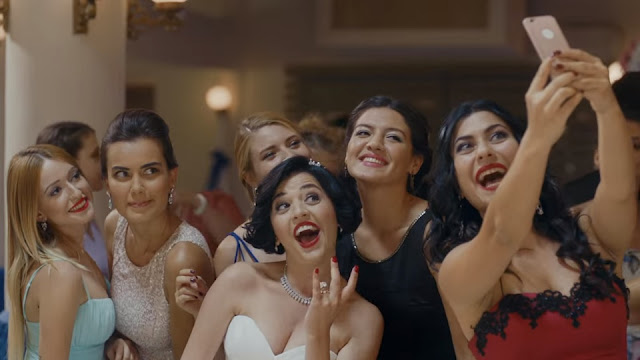 Naturally we know the two protagonists are going to fall back in love, but this would present a problem for their respective bride and groom. A revelation about Hulya's groom makes him easy to kick to the side. But the movie isn't totally defanged, as it doesn't repeat this easy way out for Serkan's bride, and they get the drama they can from that as the truth comes out (all in an amusing way of course). She too does turn out to have her bad side, but it makes sense with her character, and while the twist that ties everything together is a bit of a cop-out, it's a necessary cop-out.
The climax is total chaos, in the best way possible. It's confusing at times, but it's fun to just let wash over you and enjoy the spectacle of it all. 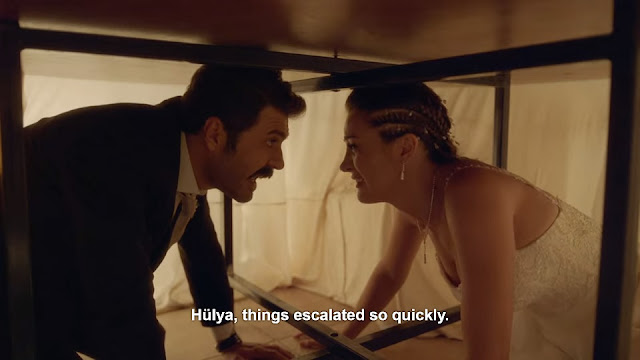 The comedy in Düğüm Salonu all landed with me, for the most part, from the snappy dialogue, to zany siuations, and the colourful cast. Something I feel the movie masters well is the art of effective swearing. But then again there is also a looooot of swearing in the later stages, so this might take the wind outta the sails of that a bit, but ah well. For anyone wondering how my Turkish is going  noticing all the little quirks with the subtitles  where the  translator's choice
The characters are what could make or break a film like this, and here they don't disappoint. Serkan and Hulya are likeable heroes, with some flaws but none that make them unlikeable.
Serkan is a much smoother player than Hulya's new groom Tarik, who's more pitiful than outright villainous. He spends more time drinking and moping than anything outright devious, and his antagonistic actions are limited. I liked his friends. They're cool dudes! From looking for a missing child, to showing genuine concern for Tarik's drinking (even snatching away his bottle and brewing him coffee), they're surprisingly likeable for the 'heavies' of one of the film's unsympathetic characters. 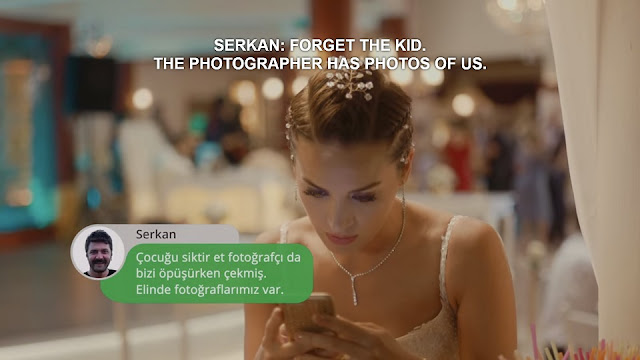 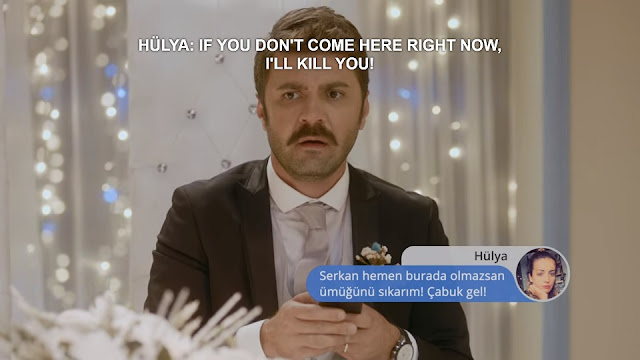 Serkan's bride Buse is a sweet  and gorgeous gal (not to mention busty!). She nails a good mix of nice while also exhibiting negative traits, subtle or otherwise. You can tell she does care, but is just a bit arrogant, and occasionally self-centered. I dug the scene where she's shitfaced, and jumps from belittling Serkan to angrily defending him. It felt believably contrary for a drunk person. The climax reveals a bit more about her, and while I liked her better in he earlier scenes, this does ultimately fit.
The parents are all varying degrees of amusing, though some understandably take a backseat, with eight of them to go round. 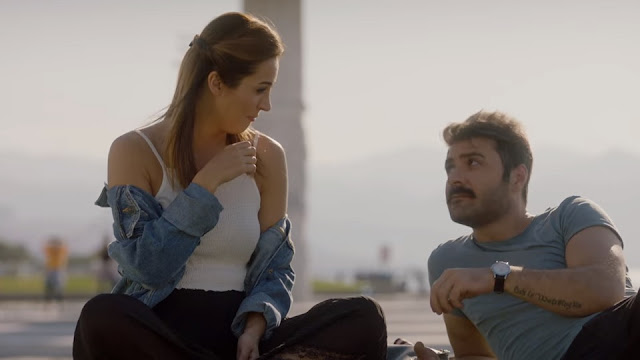 The acting is plenty of fun. Şahin Irmak and İrem Sak are fine leads, mixing humour and straight moments well. Gonca Vuslateri and Emre Karayel do very well in their roles, with the former having a hilariously over-the-top demeanour, and adorable smiles. The remainder of the hefty cast do well, namely Onur Buldu, and the young Doğan Can Sarıkaya. We also got a fun appearance from local singer Hayko Cepkin.
The music is lots of fun. Your typical modern Anatolian score. I bet Turkish cinema has whole in-house studios devoted to making this kind of music! There are some nice songs too, including one that plays out the movie very well. 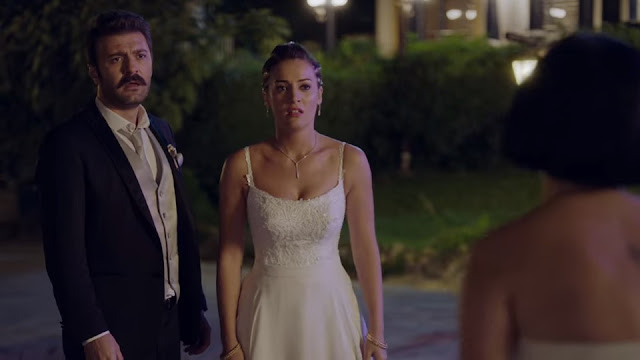 Düğüm Salonu is a fun example of Turkey's modern cinema, and a great introduction for those curious...
Posted by Chris Hewson at 8:02 AM