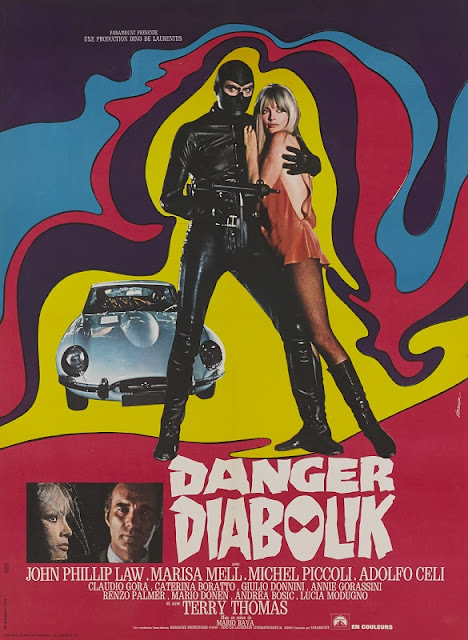 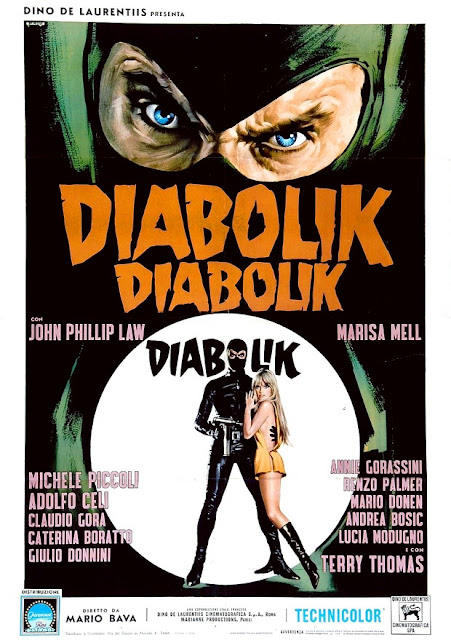 Masked supercriminals were a dime a dozen during the 60s in Italy. They all have the common ancestor of French pulp villain Fantomas, but each brought something fun and different to the table, regardless of how derivative they were. It was a fun time for eurocrime fans! The best of these by far was Diabolik, still a popular comic character in his homeland to this day, and yet he only ever had one movie! A disappointment for sure, but at least the one film he did get has long been hailed as a classic... 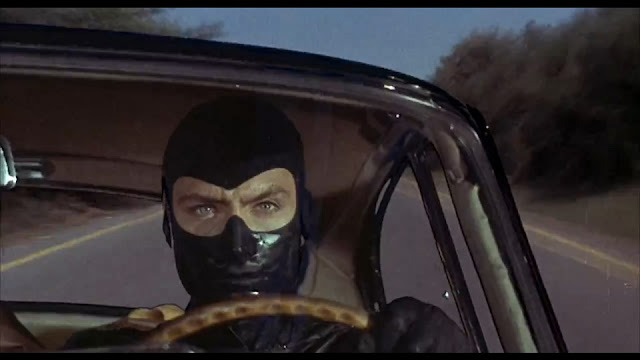 In the European city of Clerval, archcriminal Diabolik reigns. Striking from nowhere, he steals everything he sets his eye on, and makes the police and government look like fools. Eventually he earns the ire of sadistic gang lord Valmont, and the two come to blows. How will the masked thief deal with all these opponents at once? Or rather, how will they deal with him?...
The story to Danger: Diabolik is an effectively simple one. It's just about this rogue stealing valuables and outwitting the police, with no other distractions. No complexities necessary here, as the movie easily centres the action on this in a way that never feels boring or lacking. It's great fun watching the cat and mouse game between Diabolik and his opponents, seeing the insurmountable odds he's up against, and wondering how he'll make it. 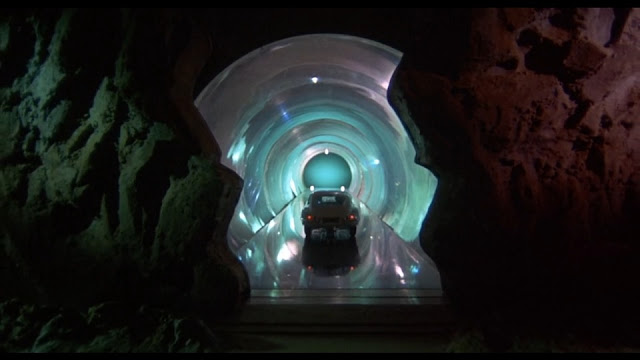 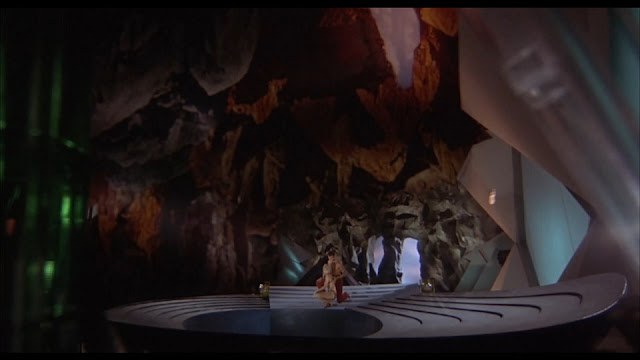 The film also has amusing commentary on useless ineffective police bureaucracy, in a way that's not exactly subtle, but never meant to be, and it's funny in a way that's never overbearing.
One of the few problems I have with Danger: Diabolik is that is is a bit long, and some scenes do drag a bit. The Italian version is 100 minutes, while other cuts are about 10 minutes shorter, mercifully so, feeling a bit more streamlined.
It also runs out of steam by the end. The main villain dies when there's still about an hour left, leaving the movie to amble on aimlessly for the next 40 minutes. I know the encounter with Valmont was never intended to be the finale, but they could've shifted it a little further ahead, or trimmed the fat in-between. 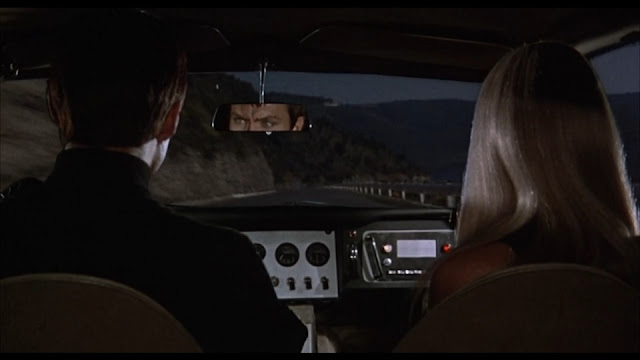 Diabolik has both the roles of villain and hero, and is always fun to follow, with we audience rooting for him. The only moments that seem weird are when he seems to kill some policemen, which goes against the character from the comics, and makes him go too far. Making them look like fools is one thing, but stabbing them to death or crashing their cars over cliffs feels more deranged and psychotic. The ending is the culmination of Diabolik's character, as he's managed to pull of another perfect heist by the skin of his teeth, only to realise things might not be as perfect as they seem, and could bring everything he's earned crashing around him.
The gangster Valmont makes for a good antagonist, even if it's clear he's totally outclassed. It's still fun to watch a he goes from seemingly having the upper hand to losing the whole deck. And lastly, Inspector Ginko  The remainder of the cast is  with an on-form Terry-Thomas being a delightfully funny presence. 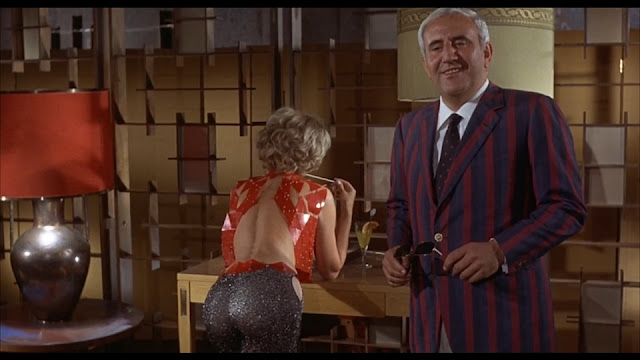 John Phillip Law is a great villain/protagonist, nailing the role of Diabolik down pat. He has the perfect stance, the slender movements required, and always has the air of being on his toes, and having an ace always up his sleeve. His booming evil laugh is great, and his delivery effective. Marisa Mell is equally good, gorgeous and seductive, and you really believe her as a gun moll. Adolfo Celi is an entertaining villainous presence, while Michel Piccoli is fine as the strong arm of the law.
There are many thrilling setpieces here, from the heist at the beginning, to the theft of the emeralds, retrieving the gold, and the battle between Diabolik and Valmont, which is pretty spectacular! The lengths he goes to to win are really something, and his opponents seriously underestimated him. 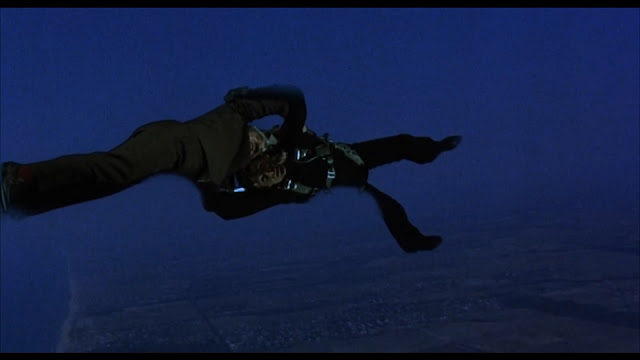 The direction is stunning. Famous horror icon Mario Bava proves himself perfectly suited in other genres, and makes up for his abominable Dr. Goldfoot sequel in one fell swoop. Everything is shot through a stylish lens, and the camera does some interesting stylistic tricks to, like the disorientating spinning effects. They work on a visual level, but also have a kind of metaphorical flair to them too, if I'm not looking too much into things. 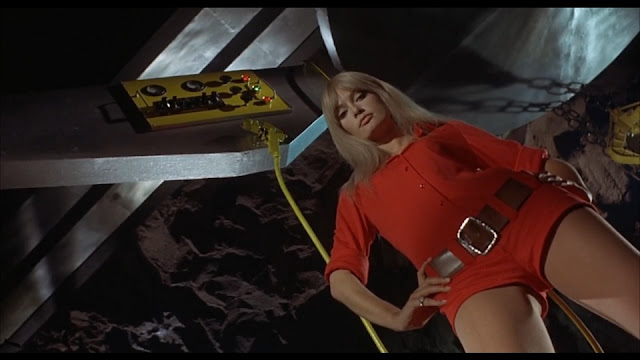 The overall look of the film is special too. It's a perfect time capsule to the 60s. when everything was groovy, swinging, and like totally far out man. The outfits are both unique and garish without being ridiculous or stupid. And the locations are awesome, especially Diabolik's lair. Everything visually that Danger: Diabolik has to offer is nothing short of spectacular.
The score is another great addition to the movie, and one of its most defining features. Composed by Ennio Morricone, it's groovy, fun, and has some varied tracks, like the triumphant piece that plays during the theft of the gold. The main theme Deep Deep Down is great, even if it is repeated a bit much. 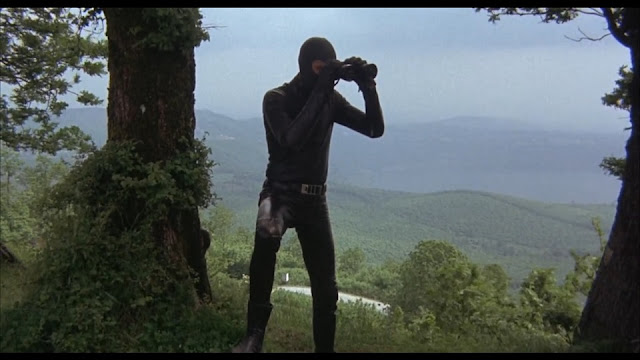 50 years later, Danger: Diabolik still remains the gold standard of 60s crime capers, and shows that Diabolik is the best in the business for a reason...
Posted by Chris Hewson at 7:38 AM